Tax revenue falls, spending up, leading to a record deficit

Tax revenue falls, spending up, leading to a record deficit 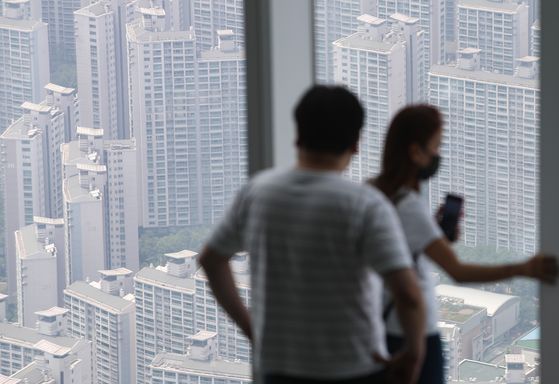 View of apartments in Jamsil, Gangnam, Seoul, on Tuesday. While taxes revenues are shrinking and spending increasing, leading to larger fiscal deficit, the government and ruling party are pushing for a reform bill that would raise taxes on real estate. [YONHAP]


As the coronavirus continues to weigh on the economy, tax revenues are shrinking rapidly and spending is jumping.

Outgoings were especially heavy in May, when emergency-relief grants of up to 1 million won ($836) were distributed to every household.

According to the Finance Ministry, the government in the first five months of the year collected 118.2 trillion won ⁠— 21.3 trillion won less than the same period last year and a 15 percent decline year-on-year.

Roughly 8.9 trillion won lost was largely due to the policy of postponing tax payments aimed to ease burdens. Some of that deferred tax may come in later.

Due to the shrinking tax take, the government’s total revenue in the first five months of this year totaled to 198.1 trillion won, 17.7 trillion won less than a year ago.

In the first five months of the year, the government spent 259.5 trillion won, 24.5 trillion won more than the same period in 2019, a 10 percent increase.

In May, when a second supplementary budget was passed, spending totaled 49.8 trillion won, which is 11.5 trillion won more than a year ago.

In the first five months of the year, the government reported a consolidated fiscal deficit of 61.3 trillion won, a record number.

Korea reported a fiscal surplus between 2016 and 2018. For the first time in four years, it reported a deficit of 12 trillion won last year.

When excluding the four social insurances – National Pension, Employment Insurance, Workers’ Compensation Insurance and the health insurance – the deficit is 77.9 trillion. This is not only a 41.4 trillion won increase compared to the same period a year ago ⁠— an 11 percent increase ⁠— but it is also an all-time record.

As of May, the central government’s debt was 764.2 trillion won.

The situation could get worse as the National Assembly on Friday approved the country’s third supplementary budget, a record at 35.1 trillion won.