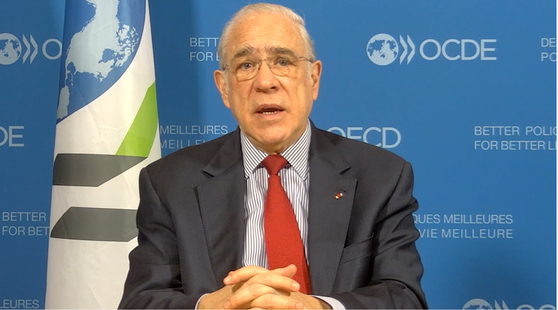 
Tax reform is inevitable considering the fiscal pressure that Korea faces especially from the aging population that is shrinking the workforce and weakening tax revenues, the head of the Organization for Economic Cooperation and Development (OECD) said.

He also supported selective support emergency relief grants over general distribution, which the Democratic Party earlier tried to push through.

“An aging population will create upward pressure on public finances through additional pensions, health and long-term care expenditure, while at the same time create downward pressure on tax revenues because fewer people will be active in the labor market, and therefore pay less in personal income tax and social security contributions,” Gurria said. “In light of these fiscal pressures, maintaining the tax-to-GDP ratio at its current low level (26.8 percent in 2018 compared to an OECD average of 33.9 percent) will be challenging and might require smart tax reforms.”

Due to impact of Covid-19 on businesses, tax revenues fell 2.7 percent last year. It was the second consecutive year in which taxes fell and the sharpest decline since the Asian financial crisis in the late 1990s.

The OECD chief stressed that tax system changes should be focused on broadening the base rather than statutory tax rates.

“Tax reforms that increase labor market participation, in particular for women, should be put high on the tax policy agency,” Gurria said.

He also said they should also take into account changes brought about by digitalization of the economy.

The OECD chief said he was in favor of targeted support over the general support for all especially considering Korea’s fiscal pressure.

“It is important to ensure that the public money is spent efficiently, all the more so as Korea is the world’s fastest aging country, which implies considerable upward pressure on public spending going forward,” the OECD chief said.

He added that supports targeted specifically to those in need have a “greater multiplier effects,” including boosting consumption compared to “across-the-board” support.

The ruling DP earlier pressured the Finance Ministry to create a two-track emergency relief fund for targeted groups of struggling small corner shops and low-income households and the general public, similar to the first emergency relief grant distributed in May last year.

The DP finally accepted the argument by Finance Minister Hong and agreed to create a targeted emergency relief grant via a supplementary budget, which will be introduced next month.

Gurria, who praised Korea’s success in defending against Covid-19 last year, raised concerns over the widening gap in the labor market, particularly for those in vulnerable situations, including non-regular workers, women and older workers.

“To counter the risks of a K-shaped recovery, the government should pursue two parallel efforts,” Gurria said. One he proposed was the Korean government working on the segmentation of labor markets and income disparities by strengthening the inclusiveness of social protection systems, such as relaxing eligibility conditions for social security programs and gradual extensions of employment insurance for self-employed.

Secondly, the focus should be helping workers, especially those of older ages, to adapt to the rapid changes including digital technologies.

“In Korea, adults with a high level of skills are 45 percent more likely than low-skilled adults to actually participate in training,” Gurria said. “This gap is 5 percentage points higher than the OECD average.”

Foreigners living in Seoul to get Covid-19 relief payment