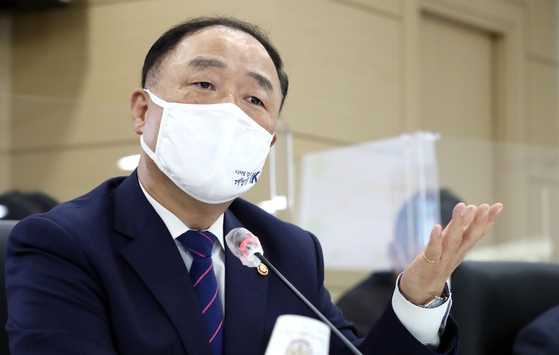 The government saw an increase in tax revenue in August, but has collected 17 trillion won ($14.8 billion) less in taxes over the last eight months compared to a year earlier as companies and small businesses struggle with the coronavirus pandemic.

Despite falling tax revenue, spending has increased, up 40 trillion won compared to the same period a year ago in the first eight months of the year.

Spending is expected to increase as the pandemic continues.

According to the Finance Ministry on Monday, the government in August collected a total of 24 trillion won in taxes, which is 3.8 trillion won more than a year ago, an 18 percent increase year-on-year.

Most of the increase came from income tax, with the government collecting 9.5 trillion won, a 3.2 trillion increase, or 50 percent, more than the 6.3 trillion won last year.

The increase in income taxes was largely due to the end of a tax suspension that was implemented earlier in the year.

In August, the government collected 11 trillion won in corporate taxes, 900 billion won less than the same month in 2019. That’s a 7.6 percent drop.

The struggles that businesses faced were more evident in the first eight months of the year.

In total the government between January and August collected a total of 192.5 trillion won. That’s 17 trillion won less or 8.1 percent less on year.


The government collected a total of 58.4 trillion won in income taxes, or 200 billion won more.

However, in corporate taxes, the government was 14.6 trillion won short to a total of 41.8 trillion won, or a 26 percent year-on-year drop.

Spending, on the other hand, continued to increase.

Government spending in August alone, thanks to job securities funding including paying subsidies to young job seekers and subsidizing companies on employees’ paid leaves, saw a 2-trillion-won on-year increase to a total of 32.7 trillion won. That’s a 6.5 percent on-year increase.


In the first eight months of this year, the government spent 39.8 trillion won more to total 388.7 trillion won, a 9.4 percent year-on-year increase.

The deficit when compared to the same period a year ago has increased 48 trillion won from 22.3 trillion won.

When adding the spending of four social securities funds — the National Pension, the Employment Insurance, the Workers’ Compensation Insurance and the National Health Insurance — the deficit amounts to 96 trillion won, nearly double the 49.5 trillion won in the first eight months of 2019.

This deficit is expected to grow to a total of 118.6 trillion won with the fourth supplementary budget, which was approved by lawmakers last month.

The Finance Minister, which recently introduced the idea of a fiscal rule limiting the debt-to-GDP ratio to 60 percent starting in 2025, in a statement said that as August recorded a surplus for a second consecutive month, it will work on managing the fiscal deficit.