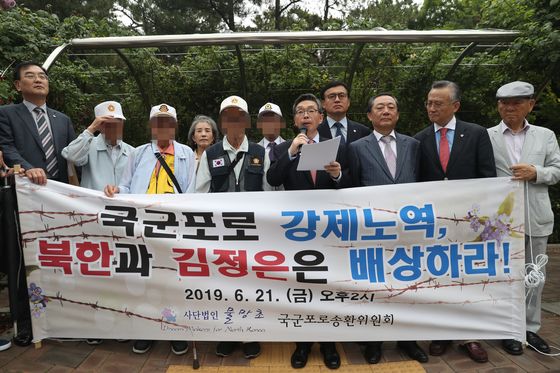 A civic group supporting two former South Korean prisoners of war who sued the North Korean government for holding them against their will for decades holds a press conference ahead of a court ruling in favor of the plaintiffs on Tuesday. [YONHAP]


A Seoul court Tuesday ruled North Korea must pay damages to two former South Korean prisoners of war (POWs) who escaped the North decades after their capture during the 1950-53 Korean War, the first time reparations have been demanded of the regime in the 70 years since the outbreak of the war.

The Seoul Central District Court on Tuesday said North Korean leader Kim Jong-un and his regime were liable to pay the plaintiffs — an 85-year-old man surnamed Han and a 91-year-old man surnamed Noh — 21 million won ($17,500) each in damages for holding them against their wishes in the North for decades after the end of hostilities in 1953.

The North must compensate the two plaintiffs 11 million each for subjecting them to forced labor during and after the war, and another 10 million each for failing to repatriate them after the armistice to suspend the war was signed, the court said.

Han was captured in 1951 by the North and spent most of his life there working as a coal miner before he was able to escape in 2001. Noh was also subjected to hard labor during the war years and fled to the South in 2000.

They were among 78 South Korean POWs who managed to escape the North before 2008.

The duo in 2016 chose to file an almost unprecedented lawsuit against the North Korean leader, arguing their subjection to forced labor by his regime was a violation of the International Labour Organization’s Forced Labour Convention as well as South Korean labor laws.

Thousands of South Korean POWs were captured by the North during the war, and Pyongyang repatriated only 8,726 of them per the 1953 armistice.

By contrast, the United Nations Command — leading the pro-South forces in the war — repatriated over 70,000 North Korean POWs, although many others chose to remain in the South.

The exact number of South Korean POWs who were detained in the North after the war is unknown. Some scholars estimate the number ranged from 50,000 to 80,000. In 2007, the South Korean Ministry of Defense estimated around 560 of its troops were still alive in the North, based on testimonies of those who fled South.

The South Korean government in the decades following the war continued efforts to repatriate its former soldiers, but requests to that effect were denied by Pyongyang, which maintained no people were being held against their will by the regime.

As North Korea is unlikely to obey a South Korean local court order, the plaintiffs may request the seizure of some of the North’s assets under South Korean control.

The plaintiffs’ legal team said they would seek to obtain the reparations from a frozen bank account owned by the North’s Korea Central Television, which receives royalties every year from South Korean companies that pay it for the right to use footage from the station.

Since 2009, the account has been frozen in South Korea as a result of Seoul’s ban on non-governmental financial transfers to North Korea in 2009.

The process required to obtain that seizure may present another hurdle for the case, but the symbolic significance of Tuesday’s ruling was made clear in the ovation that former POWs and veterans gave in the court following the ruling.

The decision is likely to affect other outstanding lawsuits filed by South Koreans against the North Korean regime, namely one filed by the families of South Korean civilians abducted by the North during the war.

The families of 13 abductees — many of them intellectuals and professors kidnapped to help the North rebuild after the war — are asking for 34 billion won as reparations for the allegedly systematic abductions, which have been denied by Pyongyang.