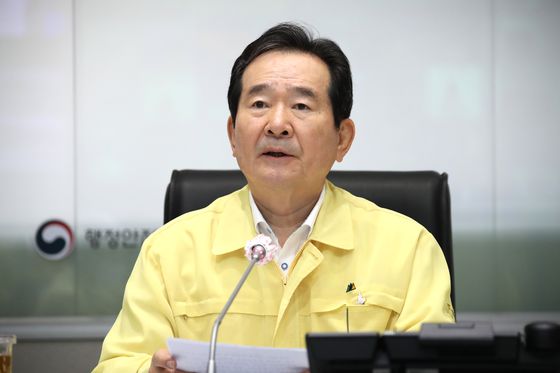 Prime Minister Chung Sye-kyun tells top government officials to sell any second homes they own during a government meeting to address the coronavirus pandemic on Wednesday. [YONHAP]


Prime Minister Chung Sye-kyun on Wednesday urged senior public servants to sell their second homes to convince the public of the sincerity of the Moon Jae-in administration’s real estate policy.

“Public sentiment is extremely bad about the real estate properties issue,” Chung said during a meeting with top government officials to discuss the coronavirus pandemic, according to a press statement from his office. “As long as senior public servants hold onto multiple homes, we will never be able to earn the people’s trust, no matter what policy we present.

“Since most top public servants are attending this meeting, I am making an instruction as the prime minister,” Chung continued. “If you own multiple homes, you must sell them as soon as possible.”

Chung admitted that public disgruntlement has reached a critical point. “It won’t go away even if you wait for time to pass,” he said. “We need senior officials to set examples. Frankly speaking, I think it is already belated.”

At the order of Chung, the government started collecting data from senior officials of the central government and local governments to find out who owns multiple homes and where they are.

The prime minister was responding to public scorn over Moon's stated policy of trying to tame the real estate market, while his top aides continue to hold onto properties as investments. Over the past three years, the government announced 21 packages of measures to cool prices and discourage speculation, largely through tax penalties and loan restrictions for multiple homeowners, but they have been ineffective in curbing home prices in popular areas.

A recent report by the Public Service Ethics Committee published in the government gazette showed that eight ministers and six vice ministers among 40 minister and vice minister-level officials in the 18 ministries of the Moon administration were multiple homeowners as of March.

According to 2020 assets reports by top officials, Deputy Prime Minister and Minister of Economy and Finance Hong Nam-ki is classified as a multiple homeowner. He owns an apartment in Gyeonggi and has ownership rights to an apartment under construction in Sejong.

Foreign Minister Kang Kyung-wha and SMEs and Startups Minister Park Young-sun each own three homes. Kang owns three in Seoul, while Park owns two in Seoul and one apartment in Tokyo.

Among the six vice ministers who own multiple homes, Education Vice Minister Park Baeg-beom owns three — one in Seoul and two in Cheongju, North Chungcheong. Five other vice ministers including Kim Yong-beom, the first vice minister of Ministry of Economy and Finance, each own two homes.

As many top officials in the administration and the Blue House and lawmakers of the ruling Democratic Party (DP) remained multiple homeowners, approval ratings for Moon and the DP plummeted. Last week, Moon’s weekly approval rating fell below the 50 percent level for the first time in four months, and the DP’s rating also plummeted to 38.1 percent. 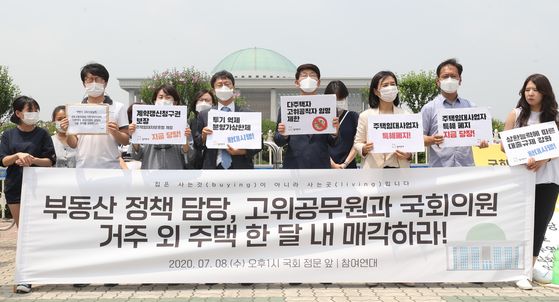 The People's Solidarity for Participatory Democracy, a liberal civic group and a political ally of the Moon Jae-in administration, holds a press conference in front of the National Assembly on Wednesday to demand senior public servants and lawmakers sell their second homes. [YONHAP]


The DP on Wednesday pressed its lawmakers to quickly follow through with their promises to dispose of real estate assets. Ahead of the April general elections, the DP insisted on written agreements from the candidates that they would sell any second homes within two years of their elections.

“I urge our lawmakers to follow through with their promises as soon as possible, although they were initially given two years to do so,” Rep. Kim Tae-nyeon, floor leader of the DP, said Wednesday.

On Tuesday, the DP told its 176 lawmakers to report to the party their current properties’ ownership status.

“Many of our lawmakers have already sold their second homes or have plans to do so,” Kim said. “The promises were made to the people and we all must keep them. The party will make sure that our lawmakers will follow through with them.”

“At the end of the day, everyone has to follow through with the promise,” said a senior DP official. “If they resist, they won’t be able to win nominations in the next elections.”

According to the civic group Citizens’ Coalition for Economic Justice (CCEJ), 42 out of 180 candidates elected as lawmakers from the DP and its satellite Citizen Party in April owned more than one home. After the election, the two parties merged into the DP, and it currently has 176 lawmakers.

National Assembly speaker Park Byeong-seug, who surrendered his DP membership after being elected speaker, had two homes. Until recently, the six-term lawmaker owned one apartment in Seo District in Daejeon, his constituency, and southern Seoul's Seocho District.

According to Park, he sold his Daejeon house in May after the DP started emphasizing the importance of keeping the election pledge. The public, however, was furious that he chose to keep a lucrative property in Seoul and sold the home in his constituency.

Presidential Chief of Staff Noh Young-min had experienced the same controversy. Although he repeatedly pressured presidential aides with multiple homes to sell any second properties, he himself owned two homes — one in Cheongju and another in Banpo-dong Seocho District in Seoul.

Last week, he said he would sell the apartment in Cheongju, fueling public rage that he was choosing a property in a speculative zone in Seoul over his home constituency. As criticism snowballed, Noh posted a message on his Facebook on Wednesday saying he will also sell the Banpo property.

“I will sell the Seoul apartment this month, as soon as my family moves out,” he wrote.