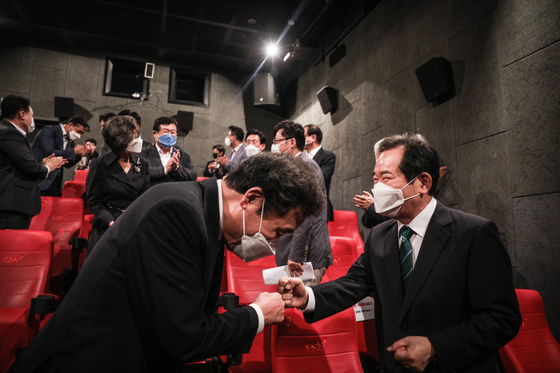 
A presidential contender from the ruling party on Monday bowed out to support former Prime Minister Chung Sye-kyun, hinting at the possibility of more convergences to defeat the frontrunner, Gyeonggi Governor Lee Jae-myung.

Rep. Lee Kwang-jae and Chung held a press conference on Monday to announce that Lee had bowed out and endorsed Chung. It was the first merger among nine presidential contenders since the party started its primary race last week.

The party will hold its first elimination round Sunday to select six contenders through two sets of opinion polls. A general public opinion poll will count for 50 percent and a party members' poll will constitute the other half.

The six will contest in the party's main primary in September.

DP insiders said it is possible that more alliances will be formed among the six candidates in the coming months. Others running for the DP's presidential nomination include Gyeonggi Govenor Lee, former Prime Minister Lee Nak-yon and former Justice Minister Choo Mi-ae.

According to the Korea Society Opinion Institute's poll, released Monday, Gyeonggi Governor Lee received 30.3 percent among all presidential contenders on both sides of the aisle, ranking second after former Prosecutor General Yoon Seok-youl, who received 31.4 percent.

Former Prime Minister Lee held an event Monday to formally announce his presidential pledges. He released a video message to announce his vision in the morning and invited guests to a movie theater to watch it with him.

Chung attended the event of his rival, signaling that they will likely form an alliance to defeat Gyeonggi Governor Lee.

Chung and Lee also had a meeting on Saturday and agreed they will work together for the DP's presidential victory.

Later in the day, Lee paid a visit to the National Cemetery. Asked about a possible candidacy merger with Chung, Lee left open the possibility. "We walked similar paths," Lee said. "We both worked as prime ministers of the Moon Jae-in administration. So we share a special responsibility for another presidential victory and we will work together for this goal."

Lee served as Moon's first prime minister from May 2017 to January 2020. Chung was his successor, serving in the post until April 2021.

Lee said there are many ways to cooperate and a candidacy merger was not the only one.

Mismatch of words and actions (KOR)