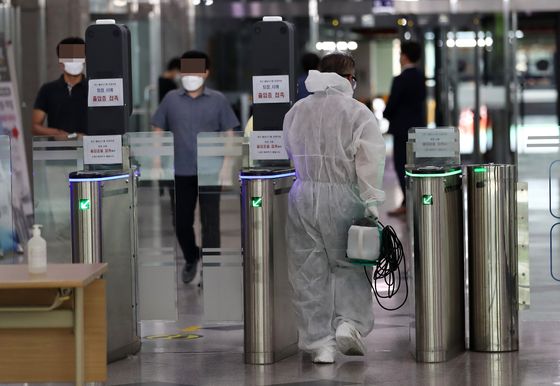 A quarantine official arrives at a government buildng in Daejeon on Monday after an official tested positive on Wednesday. [YONHAP]

Vice Minister of Health and Welfare Kim Gang-lip said Wednesday that events at churches aside from regular services will be strictly controlled starting Friday.

“From 6 p.m. Friday, all gatherings and activities outside of the minimum necessary services at churches across the country will be banned,” Kim said in a press briefing on Wednesday. “Churches have cooperated with the government in regards to keeping churchgoers socially distant during their services or ensuring that they wear masks at all times in the church, but we have seen an uptick in the number of infections in Seoul and Gyeonggi regions as well as in the Gwangju, South Jeolla and North Jeolla regions, stemming from gatherings of church members before and after the regular services.”

The Korea Centers for Disease Control and Prevention (KCDC) outlined in a statement Wednesday a list of new best practices for churchgoers and church staff members.

Churchgoers must wear masks during all services and sit at least 1-meter apart from each other. All must register their names and contact information at the door. No food consumption is permitted in churches, and members are asked to refrain from singing aloud during services.

Church staff members must not hold activities and meetings outside of regular services, which include retreats, prayer meetings, small group gatherings, bible study meetings and choir practices. They must measure the temperatures of churchgoers at the door and stop anyone with symptoms from entering. They're also required to sanitize the chapels or rooms before and after each service is held. One staff member is to be responsible for overseeing that the following measures are adhered to.

Anyone who violates the order will be fined up to 3 million won ($2,508) and the church could be shut down by the government, according to the KCDC.

Recent clusters growing in Seoul and Gwangju have been traced to religious organizations. 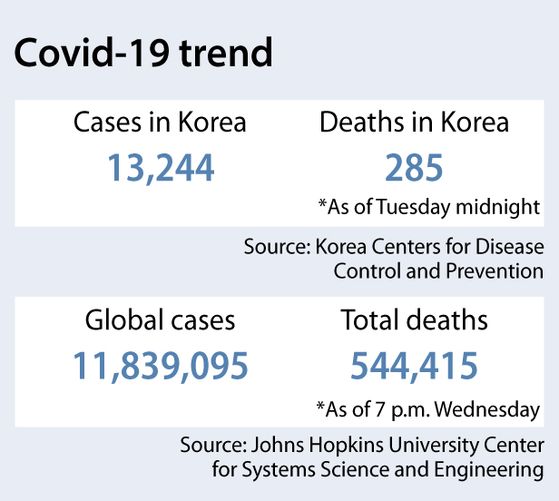 One additional member of the Wangsung Church in eastern Seoul tested positive as of noon Wednesday, bringing the total number for that cluster to 38.

Three more people were traced to a cluster in Gwangju related to the Gwangreuk Temple, testing positive as of noon Wednesday, bringing the total cases related to the cluster to 95.

Other growing clusters were traced to local sales activities.

One person who visited a sales office in Gangnam District, southern Seoul, to buy a mattress tested positive as of noon Wednesday, bringing the total number of cases linked to the office to 11.

A cluster of infections traced to a number of companies that provide in-person home visits for sales purposes in Seoul and Gyeonggi grew to 30 as of noon Wednesday, when five more people related to the cluster tested positive.

Another cluster of infections traced to a number of door-to-door sales companies in Daejeon grew to 87 as of noon Wednesday, as three more people tested positive.

“The 33 imported cases are as follows: one from the United States, six from Europe, 15 travelers from Kazakhstan, three from the Philippines, three from Qatar, three from Kyrgyzstan and one each from Uzbekistan and Iraq,” the KCDC said in a statement. “Among the 33 travelers, eight are Korean and 25 are foreign citizens.”

The number of new imported cases announced Wednesday was the highest since 40 were reported on April 5.

With the latest announcement, Korea’s daily cases soared to the 60s, from Monday's 44 cases.


The KCDC asked people to refrain from traveling to Europe.

“The pandemic is ongoing and the cases abroad are increasing daily,” Kim said in the briefing. “Therefore Prime Minister Chung Sye-kyun in a meeting earlier today stressed that Koreans should refrain from overseas travels for a while unless for essential reasons.”

Despite the upward trend in daily infections, Kim said that the government will continue to hold the national civil service exam on Friday.

“We have conducted these exams on May 5 and in June, where a total of 400,000 people took them,” Kim said. “Not one test-taker was infected. The civil service exams will be held according to their schedules and the appropriate preventive measures will be made.”