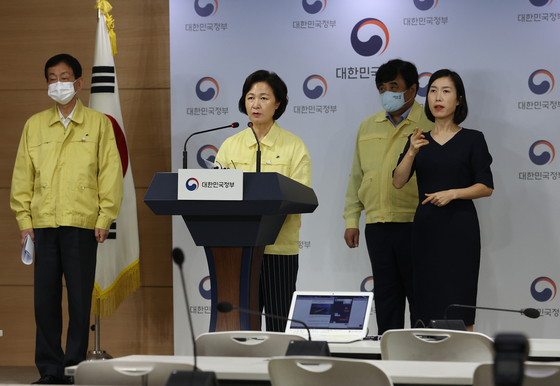 New virus cases in Korea on Thursday topped 300 for the first time since March, with authorities struggling to clamp down on a wildfire contagion among recalcitrant followers of right-wing churches.


The government, in turn, announced it would strengthen punishment on any person who attempts to obstruct anti-epidemic efforts.

The total number of cases linked to the Sarang Jaeil Church reached 739, said Vice Health Minister Kim Gang-lip on Friday, but infections are believed to have spread far beyond the church’s premises in northern Seoul, with reports showing patients were found in 12 cities and provinces across the country.

Thursday alone saw 324 people test positive for Covid-19, of which 244 were in Seoul, Gyeonggi and Incheon, according to the Korea Centers for Disease Control and Prevention (KCDC).

Eight of the new infections were found among protesters who attended an enormous anti-government rally last weekend that a large number of Sarang Jaeil Church members are believed to have also joined under the guidance of their outspoken and controversial leader, Rev. Jun Kwang-hoon.

President Moon Jae-in on Friday called the current situation the country faces “the greatest risk since Covid-19 first landed,” noting there was a systematic effort by certain groups to obstruct anti-epidemic efforts. 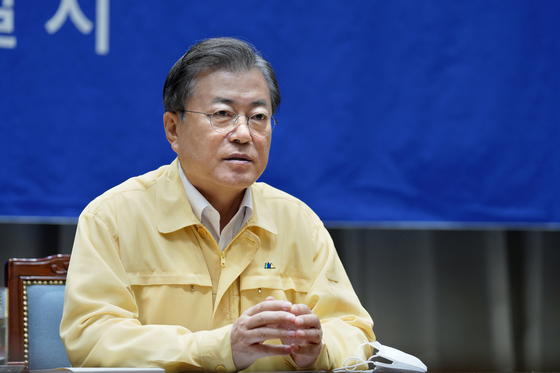 
“If there are any attempts to hinder public health surveillance or quarantine measures, [authorities] must respond firmly by invoking the infectious disease control act, obstructing official businesses, […] or if necessary, through emergency arrests or filing detention warrants,” Moon told health officials in Seoul.

“We must show the public that authority is still alive.”

Stressing the gravity of the situation that prompted his visit to the city’s disease prevention headquarters, the president said he would avail of the central government’s resources toward helping contain the virus in the capital lest it spreads uncontrollably nationwide.

The fact that Moon — who began his career as a human rights lawyer and repeatedly stressed tempering state power over the public — emphasized the necessity of force testifies to just how anxious the government has become as the latest spike in cases threatened its hard-won successes in containing earlier clusters.

Shortly after the president's remarks, Justice Minister Choo Mi-ae announced the government was revising its guidelines to respond to obstruction of antiviral efforts, with those in violation subject to pretrial detention and due to receive maximum sentencing recommendations by prosecutors.

The spike in infections throughout the past week in many ways mirrors that which Korea faced in February and March, when health authorities also found themselves scrambling to contain a mass outbreak centered around an uncooperative religious group.

But several officials, including Interior Minister Chin Young, say the current outbreak could outstrip that brought on by the Shincheonji Church of Jesus earlier this year, in light of the far more uncooperative attitude Sarang Jaeil Church and other similar churches linked to the latest contagion have displayed toward antiviral efforts.

Vice Minister Kim said health authorities attempted twice on Thursday and Friday to obtain a membership list from the Sarang Jaeil Church in order to track down worshipers at risk of infection, but both times the church refused to cooperate.

“There have been cases where [worshipers] have refused testing or quarantine, making disease prevention efforts increasingly difficult,” Kim said, noting an attempt to obtain membership records from the church will be made through law enforcement raids if necessary.

Jun, the Presbyterian pastor and notable right-wing activist who founded the Sarang Jaeil Church in 1983, has been accused of sowing dissent among his followers toward antiepidemic efforts, by promoting unfounded conspiracy theories including that Christians were immune to the coronavirus and that the Moon Jae-in administration was deliberately inflating infection counts in the country.

On Friday, Jun released a statement claiming his flock were victims of a “virus terror” attack engineered by “external dangerous forces” aimed at suppressing their dissent toward the Moon government. 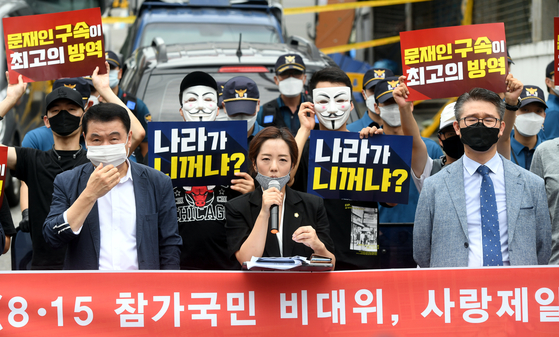 A spokesperson for Rev. Jun Kwang-hoon, the controversial far-right pastor of the Sarang Jaeil Church, reads a statement from the pastor in front of the church in northern Seoul on Friday accusing the government of persecuting his followers. [YONHAP]

“Using quarantine as an excuse, [the government] is cracking down and arresting citizens en masse.”

There have been no reports of such arrests without due cause.

The recent outbreak has intensified public criticism of Korea’s Protestant churches as a whole, which have been far less supportive in keeping with health guidelines in contrast to other religious groups in Korea.

The government on Thursday issued a measure mandating all churches in Seoul, Gyeonggi and Incheon conduct services only on an online basis, but conservative-leaning Protestant church unions have contested this decision, with one group — the Communion of Churches in Korea — claiming the act was tantamount to religious persecution.

KCDC Director Jung Eun-kyung warned Friday that if people across the country did not properly abide by strengthened social distancing guidelines and other health measures — particularly over the weekend — that the current outbreak could spiral to uncontrollable proportions.

“If the current increasing trend persists, we have to consider escalating the nationwide alert to the third level,” she said, referring to a measure that bans all social gatherings involving 10 people or more.