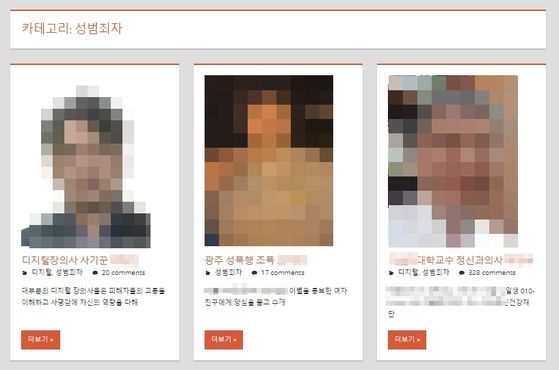 
An online website called the “Digital Prison” is publishing the names of people who have been found guilty of serious crimes, especially those related to sex offenses.

The site, which is published anonymously and may itself be committing a crime with the public release of this information, utilizes a URL with a .ru extension, which is for Russian domain names, and is hosted from a bunker in an unnamed European country.

It is published by a person who appears to be Korean, based on their knowledge of the language, though that could not be confirmed. Follow-up questions to the website were not answered.

At present, the site has information on 59 sex offenders, 10 murderers and others found guilty of serious crimes. It publishes pictures, ages, addresses and phone numbers, as well as details about allegations and dates of trials. Information is being updated frequently.

The site has become the talk of the town, but it is not clear whether it is any better than sexoffender.go.kr the government's own sex offender registry. That registry, jointly compiled and released by the Ministry of Justice and the Ministry of Gender Equality and Family, only publishes the names, address and ages of people it still considers to be dangerous and at risk of recidivism.

What led the operator — who goes by the online alias Pedro — to start a website revealing personal information about sex offenders was the “Nth room” scandal earlier this year.

“I felt limited by the government’s lenient punishment for extreme sex offenders,” he said during an email interview with the JoongAng Ilbo. “I decided to disclose their information to the public in order to let them to be punished by the society.”

The defendants in the Nth room scandal have not yet been charged, though the crimes they are accused of carry sentences that are short when compared to the sentences meted out in other countries for similar offenses.

According to Pedro, a Blue House online petition at the time calling for the disclosure of personal information of Nth room operators received over 5 million signatories. But the police rejected the idea by saying it was “of no practical use.”

Initially Pedro created an Instagram account to release details about extreme offenders, such as "Baksa room" founder Cho Ju-bin, Moon Hyung-wook, better known by his online alias “God God,” and “Welcome to Video” operator Son Jong-woo even before the press did.

Son ran a website on the dark web — which is not accessible through regular browsers — called Welcome to Video, which the U.S. Justice Department called the “largest child sexual exploitation market by volume of content.”

The Instagram account had more than 50,000 followers, but it was deleted after somebody reported the account to the social media company. One of the whistle-blowers was sued as well.

“Our website, which runs on a bulletproof server installed in a bunker in Eastern Europe, provides advanced encrypted services,” according to text on the website. “None of the comments on this website can be punished by the government. Enjoy your freedom of speech.”

“I promised with the overseas server vendor that I would never work in conjunction with Interpol,” he said. “It is also impossible to trace IP addresses of a site visitor who makes comments on the website.”

Pedro is confident about the accuracy of information regarding sexual offenders listed on the digital prison site.

“I've been deciding who should be disclosed or not after comparing verdicts, case numbers and articles. Confirmations are done with acquaintances of the offenders as well,” he said. “I am aware that the website could be subject to criminal prosecution for contempt and defamation. I'm always prepared to get punished.”

According to Pedro, about 20,000 people visit the Digital Prison a day. As the number of visitors has been steadily increasing, he is in the process of expanding the server size and strengthening the security system. It costs about $800 a month to run the website. Pedro is paying for everything out of his own pocket.

“Every time I make a new post about an offender, I receive a number of tips from site visitors on the offender’s other crimes,” he said.

He added that he is being threatened as many as five times a day by offenders whose personal details were made public.

Critics say the Digital Prison violates Article 55 of the Korea’s Act on the Protection of Children and Youth Against Sex Offenses.

The Korean law specifies “information for disclosure shall be used only to identify persons who are likely to commit sex offenses.” Anyone who violates the law could be sentenced to up to five years in prison and fined 50 million won ($41,800).

"The Digital Prison will likely be accused for defaming and contempt,” Lee Hak-min, an attorney from local law firm Sunlin, said. “The decision whether to disclose personal details should be made discreetly although they deserve to be harshly criticized."

"I am planning to continue operating the website," Pedro said, adding he has been uploading offender information "only when there is sufficient evidence."