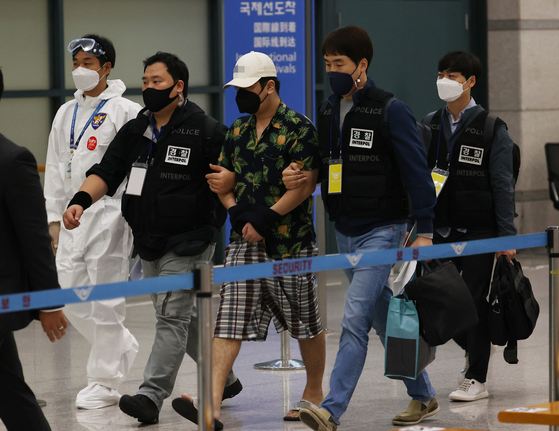 A suspected operator of the "Digital Prison," center, a controversial website that disclosed the personal identities of sex offenders and suspects, arrives at Incheon International Airport Tuesday morning after being arrested by police in Vietnam. [NEWS1]

Police said Wednesday that a Korean man in his 30s has pleaded guilty to operating a controversial website that disclosed the personal identities of sex offenders and suspects.

Cybercrime officers at the Daegu Metropolitan Police Agency said they were planning to file a pretrial detention warrant for the man on charges of violating the Act on Promotion of Information and Communications Network Utilization and Information Protection, Etc. The name of the suspect — who allegedly operated the "Digital Prison" website — has not been publicly released.

The man was repatriated to Korea Tuesday morning after he was arrested by Vietnamese police on Sept. 22. Daegu police had filed an assistance request with Interpol in early September to apprehend and extradite him.

Upon arriving at the Incheon International Airport Tuesday, he was tested for the coronavirus. After the results were determined to be negative, he was transferred to the Daegu Metropolitan Police Agency, where he was jailed and questioned about Digital Prison.

Created in June in the aftermath of the infamous “Nth room” digital pornography bust, Digital Prison listed private information on dozens of people it claimed were sex offenders, murderers and other criminals, including their pictures, ages, addresses — and even phone numbers and names of workplaces.

The site had around 20,000 daily visitors who were allowed to leave comments on individual pages set up for the accused, before it was shut down on Sept. 8.

On Sept. 3, a 20-year-old Korea University student committed suicide after his personal information — including the fact that he attended the school — were posted on the website, which claimed he shared a doctored photograph of his colleague photoshopped onto a pornographic image.

The student denied the allegation on the school’s online forum before he took his own life.

Daegu police vowed to search for other operators of the website, and determine whether they colluded with each other.