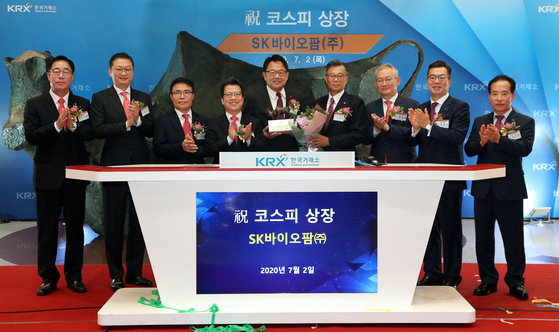 
Alarm bells are going off as the price-earnings ratio of listed biologics and pharmaceutical shares in Korea is now near 100, suggesting that the popular investment category may be in yet another bubble.

The ratio, which is the current stock price over the per-share earnings for the company, is used to gauge whether a stock is overvalued. The higher the number, the more likely the fundamentals aren't keeping up with investor sentiment.

High price-earnings ratios are usually accepted for growth companies, and the market will tolerate a fairly high number for promising businesses. But to justify a ratio of 100, the prospects have to be particularly good.

For all Kospi stocks, the current ratio is about 20, meaning that the biologics and pharmaceutical company stocks are trading at five times the overall market in terms of price-earnings.

The number is a particular concern now with the recent listing of SK Biopharmaceuticals, which attracted strong investor interest and hit number of daily price rise limits in its first days of trading earlier this month. There is worry that the sector has become speculative and that investors could get hurt as prices return to earth.

According to an analysis of 47 profitable biologics and pharmaceutical companies trading on the Korea Exchange (KRX), the average price-earnings ratio is 98.1. 5.3 times the Kospi average, which is currently around 18. A total of 12 companies were trading above 100. Shin Poong Pharmaceutical was trading at 843.3, Alteogen 778, Celltrion Pharm 417 and Pharmicell 266.

Shin Poong’s stock rose rapidly over the past two months after the agent of Pyramax, the pharmaceutical company’s antimalarial, was approved to enter Covid-19 clinical trials. Alteogen’s stock prices rapidly rose after it won a contract to export technology, and Celltrion Pharm’s stock jumped in anticipation of a Covid-19 drug it is developing. Yungjin Pharmaceutical, Medytox, Samsung BioLogics and Ilyang Pharmaceutical also had relatively high valuations.

The average price-earnings ratio for the 20 largest companies by market capitalization in KRX’s healthcare category was 182. The average ratio of the top 10 was 330, starkly different from the bottom 10, which was 12.5. There are 16 corporations whose price-earnings ratio is below the Kospi average. Dong-A ST had the lowest valuation, at 8, Vatech was 11, Dong-A Socio Holdings 12, JW Life Science 13, Whan In Pharmaceutical 15 and Kwang Dong Pharmaceutical 16.

The price-earnings ratio for media and entertainment companies was 83.6, IT was 51.2, energy and chemical 38.3 and semiconductor 24.

Whether the sector is a bubble is not a new controversy, but recently analysts are saying the blindly speculative investors have been focused on the biotech industry, amid the anticipation of Covid-19 treatments as well as the listing of SK Biopharmaceuticals.

“It is undeniable that the domestic biotech shares are still unreasonably high, even if the prospects are dazzling,” said a biotech industry researcher at a stock firm. “Stocks that jump without a strong basis can always crash as the former collapse of the biotech bubble shows.”

However, some say that the sector cannot be labeled as a bubble, considering industry characteristics.

“Companies that belong to conventional industries usually file for an initial public offering (IPO) after they gain profits, but it is common for biotech firms to file their IPOs just based on their technology,” said Jin Hong-gook, a Korea Investment & Securities analyst. “Although the ratio is high right now, with increasing performance, the ratio will naturally decline.”

“Just as Tesla has become a good investment after years of controversy for being a bubble, domestic biotech corporations will face different evaluations when they succeed, although if they fail, the industry will turn out as a bubble,” Jin added.

“It is not advisable to evaluate the stocks at this point, since the biotech and pharmaceutical industries take a while to see results until the companies go through development and testing of their products,” said Jang Byung-won, vice chairman of Korea Pharmaceutical and Bio-Pharma Manufacturers. “Globally, the industry is on an upward curve, and both the public and private sectors are currently working to ensure that the industry is profitable in the future.”