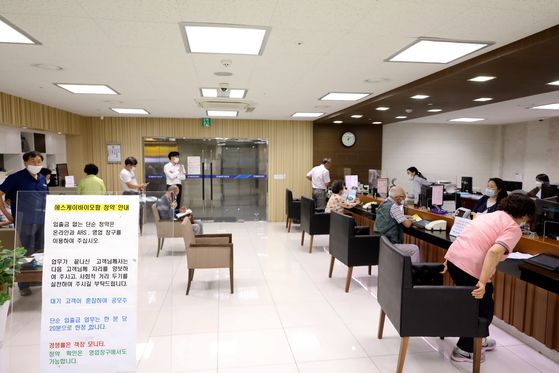 SK Biopharmaceuticals, a wholly owned subsidiary of SK Holdings, has set an all-time record for deposits and the subscription rate in its initial public offering (IPO), as desperate investors continue to scramble for gains amid low interest rates and government regulations targeting the property market.

The company, which hopes fresh funds will help it make inroads into the highly competitive and cutthroat international market, begins trading on the Korea Exchange on July 2.

Retail investors in Korea deposited 30.9 trillion won ($25.7 billion) for the biopharmaceuticals company’s public offering for a subscription rate of 323.02 to 1 — it is an all-time record for both figures.

The previous record for deposits was held by Cheil Industries in 2014, when individual investors poured 30.06 trillion won to get the stock of the fashion company.

Over-subscription is not an indication of the future price of a stock, and not always a sign of confidence. It can be a result of aggressive marketing, information inefficiencies or underwriter mispricing. An over-subscribed companies can do poorly in the secondary market.

Based on the finalized subscription rate, retail investors will receive one share of the biologics company per 7.9 million won of deposit, meaning that a 100-million-won deposit will yield 12 to 13 shares.

“This stock price is destined to go up, and all you need is enough liquidity to hold them as deposit without having to take the risk of losing the principle,” said Shin Eun-young, a 33-year-old office worker, who used 20 million won of her savings to buy the stock with NH Investment & Securities Wednesday. “If I had more money, I would have bought more stock.”

Deposited funds not used in the purchase of shares will be returned two to three days after the company goes public. 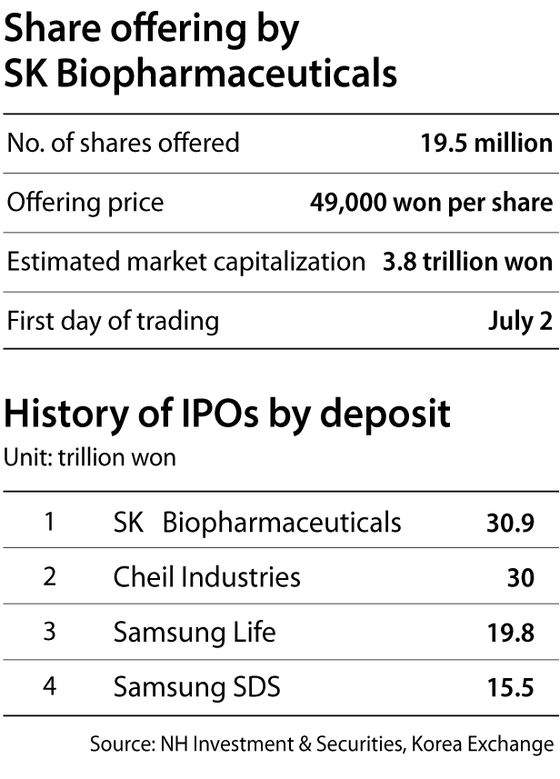 ━
While Korea’s IPO market has been weak due to the Covid-19 outbreak and generally poor sentiment, the company insists on going forward.

CEO Cho Jeong-woo said recently that there was “no reason to delay the deal” as it was more important to show the investors what it has, especially since sales of cenobamate, a Food and Drug Administration (FDA)-approved partial-onset seizure treatment, began in the United States last month.

Cenobamate is the first treatment to be developed, tested and distributed by a Korean company without a local supporting partner.

Solriamfetol, SK Biopharmaceutical’s first FDA-approved treatment, was distributed with the help of a local partner.

“SK Biopharm has a solid growth potential based on cenobamate, which obtained FDA approval last November and started to sell in the United States with its own network in May,” said Shin Jae-hoon, an analyst from Hanwha Investment.

“The U.S. market accounts for more than half of the epilepsy treatment industry, and as of the end of last year, the market valuation came to $3.1 billion.”

Analysts say that the company is being about 25 percent underpriced, assuming an initial price of 49,000 won a share.

DreamCIS, a local firm dedicated to outsourced clinical trials that went public on the Kosdaq market last month, is trading 51 percent above its offering price, though its share price has fallen steadily since hitting a peak on May 25. The price of SCM Lifescience, which does stem cell research, spiked after going public on June 17, though its share price has declined steadily since then.

━
The rush of capital flow into the soon-to-be-listed firm is very much the result of weakness of other investment options.

With the policy rate being cut to a record-low of 0.5 percent in May, gains from saving accounts of commercial banks in Korea nosedived to near 0. Real estate investment has become more of a challenge following round after round of antispeculative measures, with more possibly on the way.

“In addition to an unfavorable environment to earn money from elsewhere, retail investors have renewed their interest in the stock market when it experienced a high volatility during the peak times of the coronavirus pandemic,” said Hwang Se-woon, a researcher at Korea Capital Market Institute. “In a situation like this, when a big player like SK Biopharmaceuticals jumps in, the market’s interest is destined to be enthusiastic.”

Two other big names are planning to go public this year.

Big Hit Entertainment, an agency that handles K-pop boy band BTS, filed for a preliminary screening by the Korea Exchange in May with a goal of going public in the latter part of the year. Kakao Games, majority owned by Kakao, filed for a review early this month to go public on the Kosdaq.