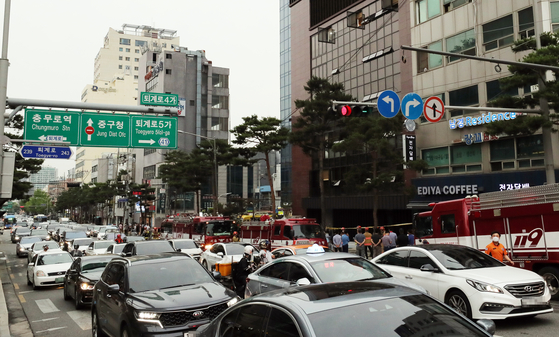 
More people are driving their cars and avoiding public transportation amid the coronavirus pandemic, according to a recent report by Samsung Traffic Safety Research Institute, a research center of Samsung Fire & Marine Insurance.

The report released on July 10 analyzed traffic in 135 areas designated by the National Transportation Information Center and T-money usage data from December 2019 through May.

After a decrease during the social distancing campaign, traffic began resuming to levels seen before the pandemic in March as more people switched to private vehicles as their main method of transportation to minimize contact.

The daily average use of T-money cards dropped around 24 percent from more than 13 million in December to 9.9 million in May, according to the report.

Those who switched to driving continue to avoid public transportation even after the number of coronavirus infections dropped from March.

The increase was especially evident during the weekends. On average 8.75 million cars were on the road on the weekends in May, a 10.7 percent increase since March.

This was double the change in the number of cars on the weekdays for the same period, a sign that more people are going out during the weekends after the government started easing social distancing measures.

Car accidents are rapidly returning back to the pre-coronavirus level in line with upward changes in the number of cars.

In total, 105,664 accidents occurred in May, a 17.3 percent increase compared to March. According to the report, this means we are seeing 16 additional accidents for every 10,000 cars.

“We are seeing more cars on the road, mainly from people who want to get away for a weekend trip. The number of traffic accidents, which had slowed down, is starting to pick up again,” said Lim Chae-hong, a head researcher at the Institute.

“People need to avoid unnecessary use of cars. [The government] needs to rethink how they can strengthen disinfection measures on buses and subways and convince more people to use public transportation.”