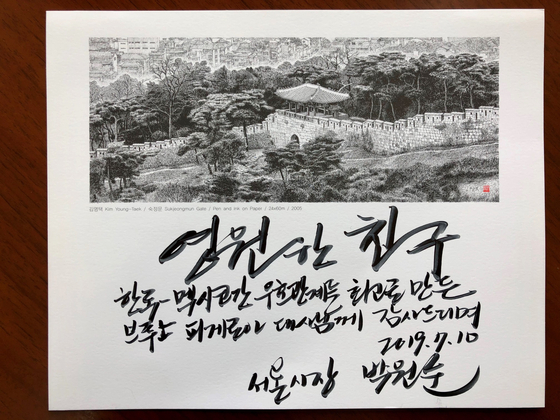 A painting of Sukjeongmun Gate in Mount Bukak in central Seoul was a gift from late Mayor Park Won-soon to Mexican Ambassador to Korea Bruno Figueroa during their trip to Mexico City last year. The handwritten letter from Park reads, "Forever friends, I thank you Ambassador Bruno Figueroa for the excellent relations between Korea and Mexico." [BRUNO FIGUEROA]


Foreign dignitaries in Seoul marked the death of Park Won-soon, the late mayor of the city, over the weekend, remembering working with him during his nine years in office.

Park was found dead in an apparent suicide on July 10.

Park worked closely with the embassies in Seoul, placing cultural exchanges and global cooperation at the center of his time as mayor.

“I accompanied him during his trip to Mexico City exactly one year ago, from July 8 to 10,” said Bruno Figueroa, ambassador of Mexico to Korea. “We don’t forget the solidarity of Seoul after the last big earthquake in September 2017. We worked together in cultural exchanges, technical cooperation, including sharing of best practices through important structures such as WeGO [World Smart Sustainable Cities Organization], based in Seoul with an office in Mexico City.”


Park traveled to Mexico city as part of a tour to South America last year to share best practices on city development.


"He agreed to be the honorary guest of the international holocaust remembrance day [in January 2019] and it was his initiative to hold an exhibition on the holocaust in the Seoul history museum," said Chaim Choshen, ambassador of Israel to Korea. "When the President of Israel visited Korea in summer 2019, he met Mayor Park who awarded him honorary citizenship of Seoul." 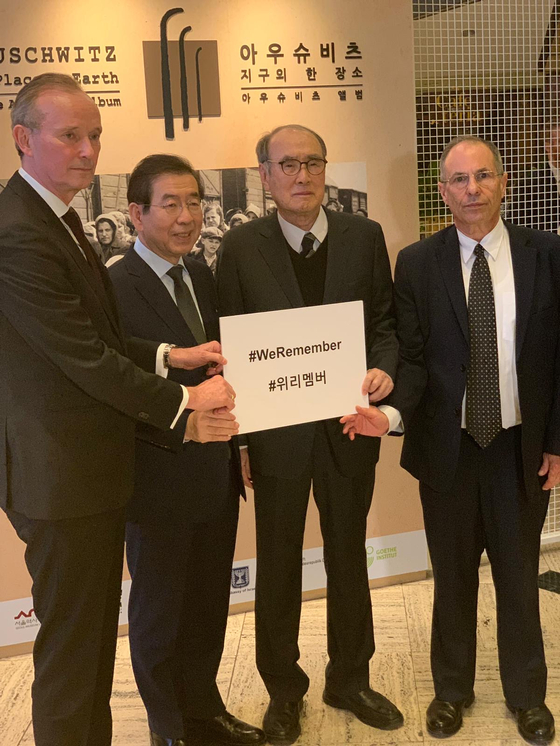 
"The Embassy was honored to work with the city of Seoul on an exhibition showcasing the efforts of early Canadian residents to Korea’s independence movement," said Michael Danagher, ambassador of Canada to Korea. "Mayor Park also supported the preservation of the home of Dr. Frank Schofield as a historical monument."

To commemorate the centennial of Korea's independence movement last year, the Seoul city government held a special exhibition at the City Hall in cooperation with the embassy to highlight several Canadians' involvement in the movement.


“He was thinking creatively and encouraging himself and others to consider new opportunities that will promote bilateral relations between Korea and other countries," recalled Ramzi Teymurov, ambassador of Azerbaijan to Korea.

During his three terms in office, Park launched a number of projects to connect more cities with Seoul, including a three-year diplomacy plan announced in 2017 that included exporting Seoul’s best practices on public transportation, water works, e-government and city planning, as well as building Seoul into a hub for international organizations and conferences.

Park visited cities worldwide in person two to three times a year to meet with other mayors and business leaders. Last year he traveled to cities including Tel Aviv to explore the start-up scene there, London to explore its fintech businesses and Mexico City to share Seoul’s best practices on smart city development.


“It’s a trend to be green, and cities in other parts of the world are going more car-free and building infrastructure that is more pedestrian-friendly,” Park told a group of reporters during a dinner in Tel Aviv in May 2019. “I am hoping that Seoul will lead the effort to be greener in Korea.”

The city government had announced in January 2019 its plan to revamp Gwanghwamun Square, reduce the number of lanes for cars and expand the pedestrian section of the square.

The Seoul Metropolitan Government last year also designated a 6.5-square-mile space within the Fortress Wall of Seoul as a so-called green transportation space, complete with a congestion charge scheme, additional green spaces, such as forests and parks, and new pedestrian roads. The goal is to reduce emissions in the area by 40 percent by 2030. 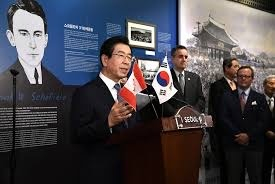 Park, left, speaks at special exhibition "Korea’s Independence Movement and Canadians" at the City Hall in February 2019. Michael Danagher, ambassador of Canada to Korea, is standing second from left. [EMBASSY OF CANADA IN KOREA]


“Mayor Park made no secret of his appreciation of the example set by the EU Delegation [as] the first diplomatic mission to use an electric car,” said Michael Reiterer, ambassador of the European Union to Korea. "He supported the EU Goes to School program that brings EU diplomats to 50 high schools every year — in cooperation with the municipal government."

"I met him several times last year during events [...] we discussed the cooperation between the Kyrgyz Republic and Seoul," said Dinara Kemelova, ambassador of Kyrgyzstan to Korea. "Under the leadership of Park [...] a great program was implemented to transform Seoul into a smart city."

As one of his last interactions with the diplomatic community in Korea, Park hosted a meeting with ambassadors that represent their nation in both Koreas — members of the Peninsula Club, which includes Finland, Australia, Portugal, Hungary, Canada, Norway and Spain — on June 25 to request their support for a possible Seoul-Pyongyang Olympics in the summer of 2032.

"I remember him telling us at the City Hall only two weeks ago about his efforts to organize and hold joint Olympic games in Seoul and Pyongyang in 2032," said Mozes Csoma, ambassador of Hungary to Korea. "This plan was totally made by him. I also remember the day when he greeted the ambassadors in Panmunjom in the DMZ [demilitarized zone] on April 27, 2019, to commemorate the anniversary of the inter-Korean summit which had been held one year earlier there."

"It is with deepest sadness that I pass my condolences to the family members and Seoul citizens," said Otar Berdzenishvili, ambassador of Georgia to Korea.