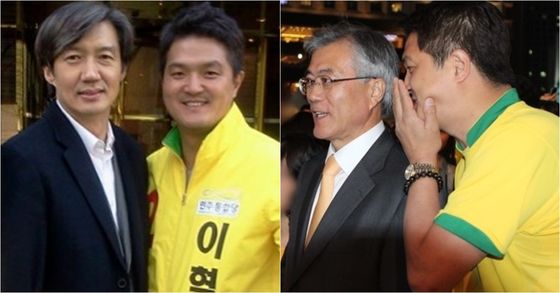 Lee Hyuk-jin, founder of Optimus Asset Management, poses with former Justice Minister Cho Kuk during his parliamentary run in 2012 (photo on left). Lee speaks to President Moon Jae-in, then a lawmaker of the Democratic Party, in his ear during a ceremony paying tribute to former President Roh Moo-hyun in 2012 (photo on right). [LEE HYUK-JIN'S BLOG, KIM AN-SOOK BLOG]


Opposition lawmakers are accusing the Moon Jae-in administration of aiding the flight from Korea of a former head of a private equity fund under investigation for fraud.

Some even claim President Moon personally smuggled the fugitive out of the country on March 22, 2018, during a state visit to Vietnam.

Lee Hyuk-jin, the 53-year-old founder and former head of Optimus Asset Management, was being investigated for alleged crimes like embezzlement before he fled Korea in March 2018. Lee was also at the time in the middle of an appeal of a 2018 rape conviction that sentenced him to two years and six months in prison. He was not jailed because he was appealing the case.

In interviews last week with the JoongAng Ilbo in San Jose, California, Lee denied the UFP's allegations, insisting he did not flee Korea. But when asked if he was able to leave the country because prosecutors did not impose a travel ban on him, he answered yes.

Optimus, which raised approximately 535.5 billion won ($445 million) from investors, found itself at the center of a ballooning scandal after it halted repayments from several of its funds. NH Investment & Securities, a brokerage company that recommended Optimus funds to its clients, sued the asset manager last month, claiming Optimus made fraudulent reports to investors.

The private equity firm reportedly purchased risky assets, such as property and private bonds, even though it claimed that 95 percent of its investments were low-risk assets like the accounts receivable of state-run companies, NH said.

The firm’s current CEO, Kim Jae-hyun, was arrested last week as part of an investigation by the Seoul Central District Prosecutors’ Office.

On Saturday, Lee told Yonhap News Agency he had nothing to do with Optimus’s recent troubles, as he was a “victim whose company was stolen” from him. The current crisis faced by the firm was a “meticulous scam orchestrated by a cartel of former financial bureaucrats and legal and accounting firms headed by Kim Jae-hyun,” he said.

Conservative lawmakers claim irregularities surrounding Optimus stretch back to Lee, who founded the fund in 2009 and managed it for almost a decade before his disappearance in 2018.

Lee, who now runs a food distribution company in San Francisco, had close ties with the ruling Democratic Party (DP), having run for a legislative seat in Seocho District, southern Seoul, for the party in the 2012 general elections.

He was not elected that year, but went on to serve as an advisor for finance-related issues to Moon Jae-in during his first unsuccessful bid for president in December 2012. Lee’s personal blog, as well as those of his associates, featured photographs of him with influential party figures, including former Justice Minister Cho Kuk, DP Chairman Lee Hae-chan, as well as Moon himself.

The wife of an Optimus board director also worked in the office of President Moon’s senior secretary for civil affairs until last month. Lee was also a classmate of Moon’s former chief of staff Im Jong-seok at Hanyang University.

There is no evidence that the Moon administration attempted to meddle in the criminal investigation into Lee. The UFP claims these confirmed ties suggest the Blue House and the ruling party may have helped Lee flee the country.

The UFP has also produced a photograph, supposedly taken at a hotel in Vietnam on March 22, 2018 — the day Lee fled Korea — showing Lee and famed football coach Park Hang-seo.

Rep. Sung Il-jong of the UFP said Park’s clothes in the photo were the same as what he wore to a meeting with President Moon during the latter’s state visit to Vietnam on March 22. Sung claimed that consistency was enough to show that Lee fled the country aboard the president’s plane, and called on the Blue House to prove that Lee wasn't part of the president’s entourage for that visit.

Lee told the JoongAng Ilbo last week that he did not accompany Moon to Vietnam as part of the presidential entourage, but that he took part "as part of a personal schedule."

Chin Joong-kwon, a leftist-turned-right wing pundit, openly claimed on his Facebook page Thursday that Moon smuggled Lee out of the country on his state visit to Vietnam.

“Former [Optimus CEO] Lee Hyuk-jin ran on a Democratic Party ticket and is believed to have taken part in a presidential visit to Vietnam,” UFP floor leader Rep. Joo Ho-young said at a party meeting last Thursday, arguing the issue was a budding corruption scandal.