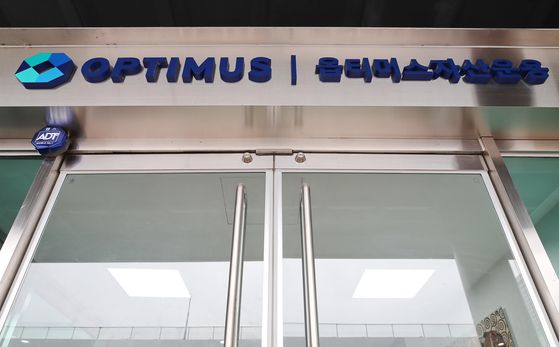 NH Investment & Securities has been ordered to reimburse all principal lost by two investors in Optimus Asset Management funds purchased through the brokerage.

The payments, which were ordered by a Financial Supervisory Service (FSS) dispute settlement committee, could cost the company up to 300 billion won ($267 million), as the decision on the two cases is likely to stand as a precedent for all the cases related to Optimus.

NH Investment & Securities was the largest seller of Optimus funds. Of the 697.4 billion won it sold, 432.7-billion-won worth of the investments remain frozen.The FSS committee is excluding professional investors from its compensation plans as it is too difficult to determine whether they were aware of the risks.

"The brokerage will have to deal with each professional investor and may be taken to court," said Kim Chul-woong, a deputy governor in charge of consumer rights protection at the FSS during a briefing held Tuesday at the regulator's office in Yeouido, western Seoul.

It is the second time the committee ordered a full refund of principal to investors for the freezing of funds by hedge funds. Last year, it ordered sellers of Pluto TF-1 to fully compensate investors.

In both cases, the FSS committee concluded buyers were motivated to invest based on wrong information introduced by the sellers.

The committee said the composition of the funds was basically impossible from the beginning and that an experienced investor would have known that this kind of fund product cannot work.

The FSS committee concluded the investment contracts by the brokerage regarding Optimus funds should be nullified as the brokerage motivated investors to make mistakes in their investment decisions by explaining to them the funds are mostly investing in accounts receivable from public institutions while in reality the funds were invested in a portfolio of bad assets.

The committee added that it is hard to hold individual investors accountable for their investments into Optimus funds as it is hard for them to know whether such an investment product can exist or not.

The FSS committee's decision is for two out of 326 cases referred for settlement, but the decision essentially means the FSS believes the brokerage should return principal to all fund investors as the two were picked as representative cases.

The committee's decision is not legally binding. The board of NH Investment & Securities could vote to challenge the FSS committee. It has 20 days to say whether it will follow the settlement plan.

The brokerage previously said that multiple institutions have to take responsibility together for investor losses, such as Hana Bank, which acted as the trust bank, and the depository, in this case the Korea Securities Depository. It said the two institutions also failed to fulfill their duties.

"We thought it was difficult for all three parties to agree on their responsibilities soon ... and the prosecution's investigation on Hana Bank is still ongoing," Kim said. "We tried to come up with the most independent and rational decision considering both the investors and companies."

"As the FSS committee has made its decision, our job now is to discuss and come up with the best solution to act in the interests of our investors," a spokesperson from NH Investment & Securities told the Korea JoongAng Daily on Tuesday.