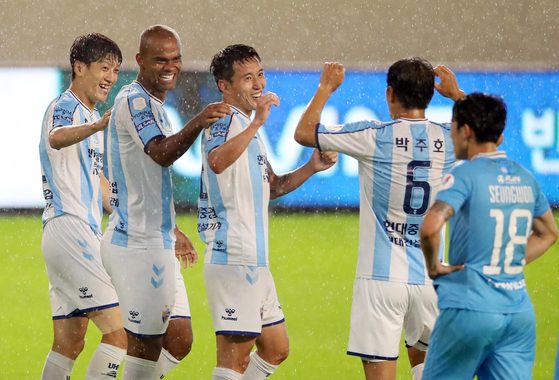 
The view from the top is always nice, but Ulsan Hyundai FC understands there is still a lot of football left this season.

Ulsan returned to first place in the K League 1 table following a 3-1 victory over Daegu FC on Sunday. The away victory in Daegu lifted Ulsan to 26 points, one ahead of Jeonbuk Hyundai Motors.

Jeonbuk eked out a 2-2 draw against Seongnam FC on Saturday after going down 2-0 and has now been held winless in two straight matches.

Ulsan had last been in first place on May 23.

At Forest Arena in Daegu, Junior Negrao grabbed a brace for Ulsan and now leads the K League 1 with 14 goals. No one else has scored in double figures so far this season, and the Brazilian striker himself has netted more goals than six of the 12 clubs in the league.

Ulsan's victory also ended Daegu's undefeated run at seven matches. Daegu, with 19 points, is in fifth place, one point back of the Pohang Steelers.

The win was surely a gratifying one for Ulsan, coming as it did away from home in a heavy downpour, but head coach Kim Do-hoon tried to keep his excitement in check.

"We know exactly what we want to accomplish and where we want to go. And we're taking one step at a time," Kim said. "Our players must compete to the absolute best of their ability. We'll stay focused on preparing for upcoming matches. We want to be at the top of the table at the end."

Midfielder Lee Chung-yong, a key offseason acquisition who set up Shin Jin-ho's opening goal Sunday, said he's not going to get too excited about taking first place in the middle of July.

After all, this is a club that blew a chance to end a 14-year championship drought in 2019 by losing the final match of the season.

"I am pleased that we pulled out an away win against a tough opponent, and this should boost our collective confidence," Lee said.

As for battling Jeonbuk for the top, Lee said: "They're one of many teams that we have to take on, and the race will go down to the wire. If we continue to prepare hard for matches, I think we'll have the last laugh."

Jeonbuk barely got a point against Seongnam FC, who entered Saturday's match on a six-match winless skid.

Seongnam built a 2-0 lead four minutes into the second half but lost a couple of defenders to injuries that left a gaping hole on the backline. Han Kyo-won cut the deficit in half in the 54th, and an own goal by Seongnam defender Yeon Je-woon nine minutes later evened the score at 2-2.

Elsewhere on the weekend, a nine-man Incheon United ended their eight-match losing skid with a dramatic 1-1 draw versus Sangju Sangmu on Saturday.

Sangju got on the board in the 47th on Oh Se-hun's header, and then Incheon saw two players sent off over the next 15 minutes.

With the clock winding down, Ji Eon-hak stunned Sangju with his right-footed equalizer, setting off a celebration worthy of a championship victory.

Sangju was seconds away from improving to 23 points, which would have placed it just two points back of Jeonbuk for second place.

All three matches on Saturday ended in a draw, with Pohang Steelers and Suwon Samsung Bluewings ending in a 1-1 deadlock.

On Sunday, Gangwon FC routed Gwangju FC 4-1 to end their four-match losing streak. Cho Jae-wan had two goals for the winning side.

K League football season to finally kick off on Friday