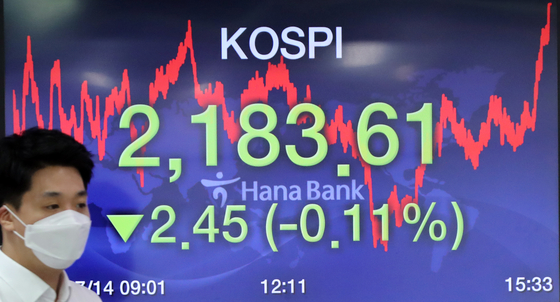 A screen shows the closing stats for the Kospi in a trading room at Hana Bank in Jung District, central Seoul, Tuesday. [YONHAP]


Stocks closed marginally lower Tuesday amid concerns over a global resurgence in new coronavirus cases, despite a massive stimulus package and rising demand in China. The won fell against the dollar.

Korea added 33 new cases Tuesday, marking a sharp fall from 62 new virus cases reported Monday and 44 cases Sunday. But health officials warned of a continued rise in cluster infections and imported cases that have put a strain on the country's quarantine efforts.

Chinese imports increased 3 percent from a year ago, rebounding from May's 3.3 percent contraction.