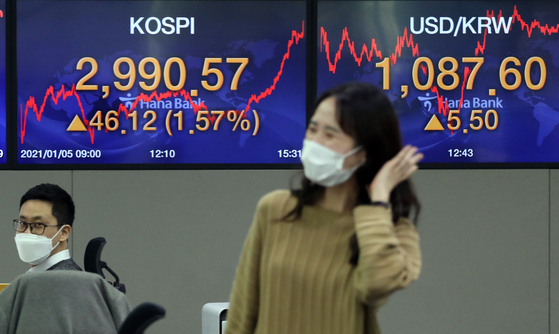 A screen at Hana Bank's dealing room in central Seoul shows the Kospi closing at 2,990.57, up 46.12 points, or 1.57 percent, compared to the previous trading day, hitting another record high on Tuesday. [YONHAP]


Stocks hit a record for a seventh consecutive session Tuesday on economic rebound hopes, finishing just short of the 3,000-point mark. The won fell against the dollar.

Stocks remained in negative terrain in the morning session, with global coronavirus infections exceeding 85 million and concerns over a new Covid-19 variant growing in Europe.

But the index returned to positive territory in the afternoon session, as expectations of a further stock price hike offset investor appetite for profit-taking.

Multiple brokerage houses expected the Kospi to reach as high as the 3,300-point level.

The local currency closed at 1,087.6 won per dollar, up 5.5 won from the previous session's close.