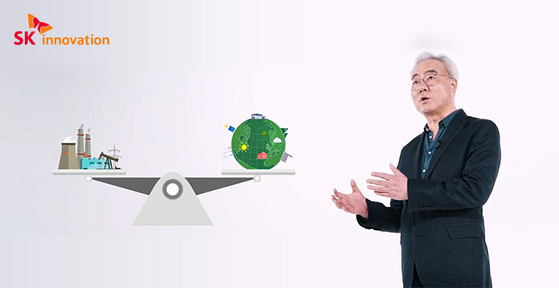 SK Innovation's CEO and President Kim Jun stresses the importance of transforming into an eco-friendly company in a video message sent to employees. [SK INNOVATION]

For petrochemical companies, their negative impact on the environment has always been an issue and something they have often had to defend or justify. Kim, however, said it’s time the company goes beyond reducing that effect and puts the environment at the center of its business.

“If climate change occurs at an accelerated rate, thereby driving forth a more rapid transition to green energy sources, the existing energy and chemical companies will lose value to the point where they have to worry about their very survival,” he said.

Credit rating agency S&P, for example, proposed that the corporate value of energy and chemical firms should be discounted by 30 percent of the present value because of carbon risk.

“Our stakeholders are demanding that we strive toward fundamental change and immediate action. In other words, instead of resorting to short-term improvements and responses, we are asked to become and do something completely different — that is, undergo a total transformation.”

Completely changing the petrochemical business overnight is an impossible task, Kim noted. Instead, the company would expand investment aimed to grow businesses that generate positive change in the near future — electric vehicle (EV) batteries and eco-friendly petrochemical materials. SK Innovation is Korea’s third largest manufacturer of EV batteries. In the past year, the company has also completed a massive production facility to produce low-sulfur oil products.

All of these efforts are conducted under a blueprint dubbed “Green Balance 2030,” announced last year. The goal is to create more positive environmental impacts than negative effects by 2030.

“Green Balance 2030 is a vision that will be pursued by SK Innovation as well as a new identity that the company will need to build,” said Kim.