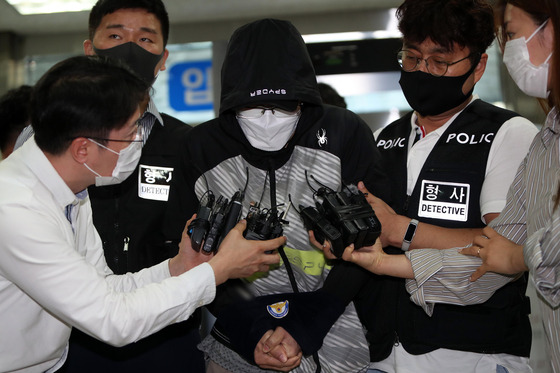 Ahn Joo-hyeon, the so-called team doctor accused of abusing current and former triathletes, is surrounded by reporters as he makes his first public appearance since the death of Choi Suk-hyeong at a Daegu district court Monday afternoon. An arrest warrant was issued by the court later that day. [YONHAP]

The sports therapist accused of years of verbal and physical abuse of the late triathlete Choi Suk-hyeon admitted to the allegations against him in comments to reporters in his first public appearance Monday.

A Daegu district court on Monday afternoon issued an arrest warrant for Ahn Joo-hyeon, 45, accusing him of physically assaulting Choi and other current and former athletes on the Gyeongju City Hall's triathlon team, illegally practicing medicine and extorting money from athletes as payment for their treatment. He was later detained.

Along with the team's former head coach, Ahn has been at the center of a high-profile abuse scandal after the 23-year-old athlete committed suicide last month.

The Daegu court signed off on the warrant after determining that there was a possibility that Ahn could flee or try to destroy evidence.

Ahn was called the “team doctor” by athletes, but he does not have a medical license nor is he a certified sports therapist.

Ahn made his first appearance in front of media since Choi’s suicide at the Daegu court to undergo questioning to determine the warrant's validity Monday afternoon.

Clad in a dark-hooded windbreaker, a cap and a mask, he told reporters at the Daegu district court, “I admit to all the allegations.”

Several athletes have also accused Ahn of sexual harassment, alleging that he touched their chests and thighs under the pretext of medical treatment. It was unclear whether he was also admitting to those allegations.

When asked by reporters why he pretended to be a doctor, Ahn only bowed his head and said, “I’m sorry.” He also apologized to Choi and the other athletes.

Choi committed suicide on June 26 after allegedly enduring years of abuse from the coach, team doctor and teammates. As the story received broad public attention in the following weeks, sports officials, the government and police have belatedly sought to hold her alleged abusers accountable.

Before her death, Choi had filed a criminal complaint in March against four individuals on her former team from 2017 to 2019, the coach, team doctor and two senior athletes. She also filed petitions with the Korea Triathlon Federation and the Korean Sport & Olympic Committee, but her complaints failed to result in any actions against her alleged abusers.

On July 6, the Korea Triathlon Federation on Monday permanently banned the head coach, Kim Gyu-bong, and the female captain Jang Yun-jung from participating in future federation events. The other senior male athlete, Kim Do-hwan, was banned for 10 years. It did not take action on Ahn, however, as he was not a member of the association.

The Gyeongju Sports Association filed a complaint against Ahn with the Daegu District Prosecutors’ Office’s Gyeongju branch office on July 8.

Ahn’s arrest is expected to accelerate the criminal probe into the allegations raised by Choi.

Police on Tuesday raided the residences of the team coach and captain.

Choi claimed to have been verbally and physically abused as far back as 2016. Her allegations included being force-fed large amounts of bread as punishment for gaining weight. Her family specifically pointed to Ahn for beating their daughter over the years, including during an overseas training in New Zealand, accusations which have been backed by voice recordings and testimonies from former teammates.

Ahn was previously arrested by police at his residence in Daegu without a warrant last Friday when North Gyeongsang police raided his home and confiscated his cell phone.

Last week, the Korean Sport & Olympic Committee revealed that on June 23, three days before Choi’s death, Ahn had submitted to the committee’s Clean Sports Center a handwritten letter admitting to some of Choi’s allegations against him.