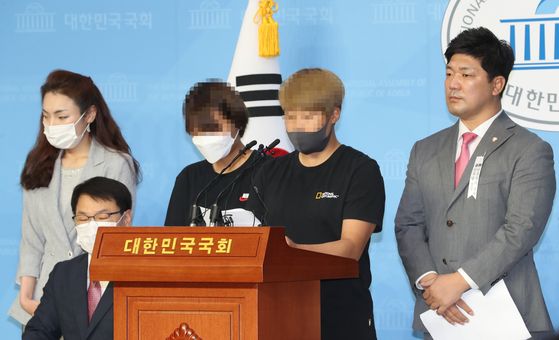 Former teammates of the late triathlete Choi Suk-hyeon hold a press conference at the National Assembly in Yeouido, western Seoul, on Monday supporting Choi’s story of having endured years of systematic verbal and physical abuse prior to her suicide. Her former coach and two senior athletes on the same day denied allegations in testimony before the parliamentary sports committee. [YONHAP]


Former teammates of Choi Suk-hyeon, the late 23-year-old triathlete who committed suicide after claiming to have endured years of systemic verbal and physical abuse, on Monday provided accounts corroborating many of Choi’s allegations.

The two former teammates, who did not provide their names, spoke at a press conference held at the National Assembly in western Seoul, supporting Choi's and her family’s allegations that her former team coach, doctor and senior athletes had verbally abused and assaulted her for years.

“The coach habitually verbally abused and assaulted athletes, including Suk-hyeon, and the captain also instigated group bullying and verbal and physical abuse on a daily basis,” one teammate said.

On the same day, the head coach of the Gyeongju city hall team and two athletes who allegedly abused Choi denied the allegations raised against them, while testifying in front of the National Assembly sports committee.

Choi, a junior women’s triathlon champion, was found dead by police on June 26 at her team dormitory in Busan. She had left a haunting last KakaoTalk message to her mother that day, asking her to “reveal the sins” of those who had abused her.

Choi had filed criminal complaints against the coach, team doctor and two senior teammates of her former Gyeongju city hall team from 2017 to 2019, alleging verbal abuse and assault.

She had earlier this year also filed complaints with the Korean Sport & Olympic Committee and the Korea Triathlon Federation, but received little response.

Choi was a high school student when much of the abuse allegedly took place. She was was a rising athletic star, having been selected as a member of the junior national triathlon team in 2015. Her family and teammates have said that Choi had been especially pressured by her coach and team doctor over her weight, was force-fed 200,000 won ($167) worth of bread in one instance.

Senior athletes on the triathlon team were also alleged to have taken part in bullying Choi.

Choi’s former teammates shared testimony backing her story that was introduced by United Future Party Rep. Lee Yong, a former bobsled coach of the national team, who brought the issue to light at the National Assembly last Wednesday.

The former teammates admitted they had been afraid to speak up earlier because of possible repercussions.

One former teammate said she “took for granted” the verbal abuse and violence and admitted the “team was a kingdom ruled by the coach and captain.”

“I apologize to Choi and her family for not being able to have the courage to press charges with her because I was afraid of [not] being able to maintain my athletic career," another teammate said. “I hope that the assailants recognize their crimes properly and are punished even now.”

Since last week, Choi’s family’s accounts, excerpts from her journal, voice recordings and testimonies from former teammates opened a window into the dark reality of abuse and pressure faced by Korean athletes. Choi’s death had prompted a public outcry, with multiple Blue House petitions gaining traction, and the story sparked responses from sports authorities, Gyeongju city officials, lawmakers and the Sports Ministry.

“As the coach, I admit that it is my fault that I was not aware that an athlete was being assaulted," he said.

Pressed by a lawmaker on the committee, he admitted to seeing the team doctor hit Choi during training in New Zealand, but said that he had actually tried to stop the violence.

One of the senior athletes accused of harassing Choi testified, “I have nothing to apologize about. It is regrettable that she died [...] but I have nothing to be sorry about and only have a regretful heart.”

The fourth person accused by Choi, the team doctor named Ahn Joo-hyeon who was characterized as the instigator of much of the violence against the young triathlete, did not attend.

Ahn reportedly did not have a medical license and was a temporary hire who was not on the payroll of the Gyeongju City Hall.

Sports Minister Park Yang-woo apologized to the late Choi’s family and to the public, adding that he will order for a special investigation into the allegations to fix the problems with the existing system and to prevent a similar situation from happening in the future.

The Korea Triathlon Federation also convened a commission for fair play in sports on Monday to decide upon what disciplinary action it will take.