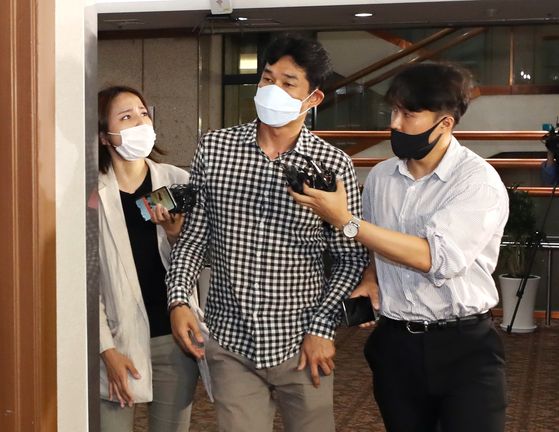 Kim Gyu-bong, center, the coach accused of verbal and physical abuse of the late triathlete Choi Suk-hyeon, is surrounded by reporters as he heads into a meeting of the Korea Triathlon Federation’s fair play committee at the Seoul Olympic Parktel in Songpa District, southern Seoul, Monday. Kim and the team captain was later banned for life by the federation. [YONHAP]


The Korea Triathlon Federation on Monday banned for life the head coach and a senior athlete accused by late triathlete Choi Suk-hyeon of verbally and physically abusing her for years.

Some 10 days after 23-year-old Choi took her own life on June 26, the Korea Triathlon Federation convened a fair play committee Monday afternoon to decide what disciplinary action to take against the coach and two athletes.

Before her death, Choi had filed a criminal complaint with police against four individuals from her former team from 2017 to 2019 — the coach, team doctor and two senior athletes — after suffering years of systemic verbal abuse and assault. She had also filed petitions with the Korea Triathlon Federation and the Korean Sport & Olympic Committee to no avail.

After over seven hours of deliberation, the committee decided late Monday to ban for life Kim Gyu-bong, the head coach of the Gyeongju city hall team, and the female captain Jang Yun-jung. Jang has been accused of being the ringleader in the bullying of Choi and others on the team.

A senior male athlete was also banned for 10 years.

A permanent ban is the most severe disciplinary action the committee can recommend and means that the two individuals will not be able to partake in any event held by the Korea Triathlon Federation ever again.

The coach and two athletes denied the allegations against them.

However, the panel determined that the evidence left by the late Choi, including voice recordings, along with testimonies made by other victims on the team, possessed stronger credibility. It also determined that Kim and the athletes appeared to have tried to replicate their testimonies before appearing in front of the committee.

Ahn Young-ju, the chair of the Korea Triathlon Federation’s fair play committee, said Monday, “There was a considerable number of areas in which the testimonies of the victims matched each other, and there was no indication that the victims intentionally made up facts. Their testimonies appeared to be credible.”

In contrast, he pointed out that the coach and senior athletes accused of abuse “testified with the same content, in the same pattern.”

The federation, however, was not able to take disciplinary action against the fourth individual accused by Choi, a team doctor named Ahn Joo-hyeon, because it did not have the authority to do so. Ahn was a temporary hire without a medical license who was not on the payroll of Gyeongju City Hall and not affiliated with the federation.

Instead, the federation plans to sue Ahn for defamation.

Ahn has been portrayed as the main instigator of the violence against Choi, and is accused of allegedly slapping her face and beating her body during training.

Choi, once a rising star who was selected as a member of the junior national triathlon team in 2015, was found dead on June 26 after leaving a haunting text message to her mother stating: “Reveal the sins of those people.”

Two of Choi’s former teammates in a press conference held at the National Assembly on Monday corroborated Choi’s allegations and admitted that they had previously been afraid to speak up in fear for repercussions on their athletic careers. One teammate said that the team doctor had touched her in a sexual manner on the chest and thighs under the pretext of treatment.

On the same day, the coach and two athletes appeared to show little remorse toward Choi while testifying to the National Assembly’s sports committee.

President Moon Jae-in at a cabinet meeting Tuesday ordered a thorough investigation into the allegations of abuse raised by Choi and called for appropriate punishment to be carried out.

“Recently, incidents of violence in the world of sports have been sparking great societal indignation,” said Moon.

“The harsh treatment and violence against an athlete is an outdated legacy that cannot be justified with any words,” added Moon, calling on the sports world to “evolve from such backward behavior.”

He stressed that "such an unfortunate incident shouldn't occur again,” adding that “appropriate punishment and responsibility should follow a thorough investigation.”

He added that if allegations are indeed true that Choi had not been able to find help despite reaching out to the police, sports authorities and Gyeongju City Hall, “this is an issue we definitely need to address.”

Moon went on to order related agencies and sports authorities through a thorough probe to “speedily come up with measures to prevent such an incident from occurring again.”