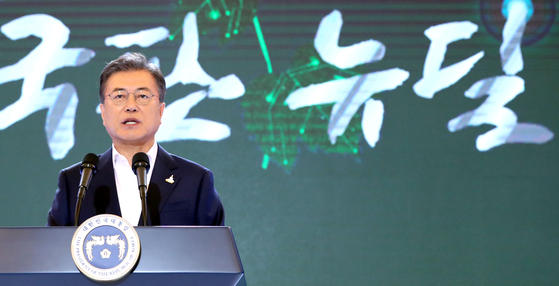 
The government plans a Korean New Deal program that it hopes will create 1.9 million jobs.

A total of 67.7 trillion won of the spending will be made by the end of 2022, the last year of the current administration. Some 72 percent of that, or 49 trillion won, will be covered by the government, and the rest by the private sector.

The government expects 887,000 jobs to be created within the next two and a half years.

President Moon Jae-in on Tuesday laid out details just three months after he proposed the idea of a New Deal to help Korea get over the coronavirus crisis and lay a foundation for future growth.

“The Korean New Deal is Korea’s declaration of its transition to becoming a leading country from a country that has trailed behind, from a carbon-dependent economy to a low-carbon economy, and from an unequal society to an inclusive society,” Moon said in an address from the Blue House. “It demonstrates the government's determination to change the fundamentals of Korea.”

The president said while Korea has made impressive developmental progress in a compressed period of time, past methods have reached their limits, and also resulted in deep inequalities.

The Korean New Deal will kick off changes that will last a century, Moon said.

Moon praised the country for setting an example of how to overcome the coronavirus.

“Without locking down [specific] regions or the entire country like in some other countries, we succeeded in an effective quarantine without having to halt our economy,” Moon said. “'K-quarantine' has become a world standard, and thanks to the success of K-quarantine we succeeded in minimizing the economic impact and built confidence that we can be the world’s fastest economic recovery.”

He said Korea’s position in the global community has changed thanks to the coronavirus crisis: It is no longer a country that trails behind other countries but is now a country that leads.

“However, we cannot be overly optimistic of the days to come as humanity faces an unprecedented challenge,” Moon said.

“We need to act proactively to this massive change,” he continued. “If we fall behind such changes, we will remain second-place forever.”

Monday’s televised presentation at the Blue House was led by Finance Minister Hong Nam-ki in a format like a TED Talk.

Hong started his presentation by saying the world’s economy is facing its biggest crisis since the Great Depression and that Korea can’t avoid the impact of the coronavirus.

“The Korean New Deal is not only about government investment, as regulatory improvements will be made simultaneously,” Hong said.

He emphasized that the government’s investment in the New Deal is just a kind of pump primer, which is meant to spark larger investment from the private sector. 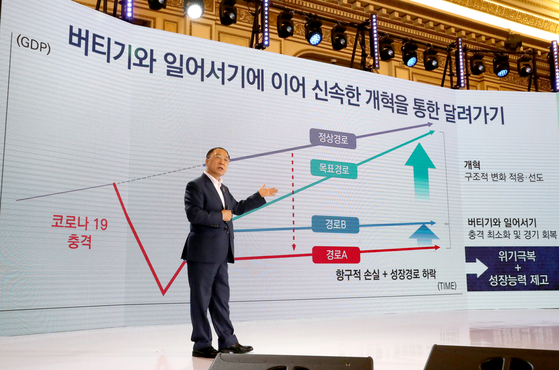 
The New Deal is split into two main components: the Digital New Deal and Green New Deal. Hong said both pillars are upheld by a widening of the social safety net.

The government has planned 10 major projects.

For the Green New Deal there are three more: green remodeling, green energy and the environmentally friendly future mobility.

The remaining four projects are convergences of digital and green initiatives: green smart schools, which includes setting up high quality Wi-Fi connectivity in every school as well as distributing 240,000 tablet PCs; digital twin, which upgrades 2-D based infrastructure data such as road maps and sewage maps to 3-D-based simulations; digitization of infrastructure including public safety; and smart green industrial complexes.

The Digital New Deal projects are supposed to strengthen Korea’s digital infrastructure and services in the public and private sectors.

The Green New Deal projects are supposed to foster the renewable energy sector, which the administration has been pushing since it took office in 2017, and to lower Korea’s carbon emissions.

They include setting up smart grids to raise energy efficiency and expand renewable energy farms.

Also the government plans to create by next year a low-carbon, green industrial complex, as well as a green convergence cluster where different companies will receive government support for technology development, testing and production as well as sales.

The widening of the social safety net is supposed to narrow the gap between the wealthy and the poor.

The Korea Chamber of Commerce and Industry, a major business lobby group, welcomed the government’s move, although it claimed that deregulation should take top priority.

“The government’s strategy of pulling together digital resources as an opportunity for a new growth engine appears to be a prudent move in the wake of the coronavirus,” the group said in a statement, “But we hope that the government will expedite the process to reform the outdated law.”