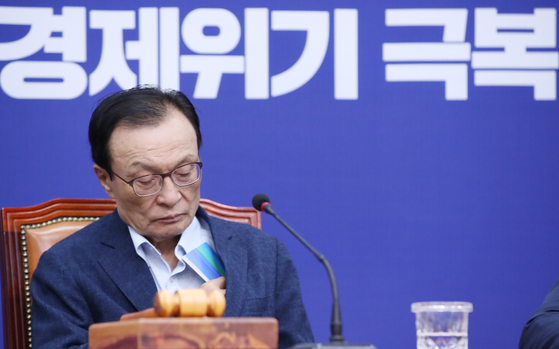 “I admit to my responsibility for the people’s disappointment and the administrative vacuum" within Seoul city government after Park’s suicide, Lee said during the Supreme Council meeting in the morning. “I also offer my words of consolation to the petitioner for the agony she is experiencing, and I once again offer my heartfelt apology as the chairman of the DP about this situation.”

It was Lee’s first public statement about Park’s suicide and the subsequent revelations by his former secretary about the mayor’s years of alleged sexual harassment.

Park, the mayor of Seoul since 2011, was found dead last Friday in an apparent suicide after a police complaint was filed accusing him of sexual harassment. His death was particularly shocking as he had defended some of the earliest sexual harassment cases in Korea.

Park, while holding the office of Seoul mayor, joined the DP in 2012, becoming one of the ruling party's most powerful politicians.

In his statement on Wednesday, Lee only apologized to the people, but not to the accuser. He also did not include any direct mention of Park by name.

Lee also made clear that the party has no plans to investigate Park’s suspected sexual misconduct.

“The DP has always been an advocate of victims,” Lee said. “From the perspective of the petitioner, she would want the truth to be revealed. But realistically, the party cannot conduct an investigation since he is no longer alive.”

Lee, then, told the Seoul Metropolitan Government to conduct a through investigation and urged the public to stop badgering the accuser.

The party will also come up with special measures to prevent future misconduct by DP politicians who are serving government posts and offer gender education to party members, Lee said.

After keeping mum about the situation for days, the DP issued its first apology to the public on Monday. A brief statement was issued by Rep. Kang Hoon-sik, the party's chief spokesman, but it did little to calm the public furor about the party leaders’ handling of a sexual scandal within its circles.

Lee has reacted particularly emotionally. When he paid a visit to the Seoul National University’s mourning facility to pay his respects on Friday, he cursed at a reporter who asked him about the party’s response to the sexual harassment allegations against Park, calling the reporter a “bastard.”

The Journalists Association of Korea on Monday issued a statement to urge Lee to apologize to the reporter, but Lee had not done so as of Wednesday.

Rep. Nam In-soon, a Supreme Council member and chairwoman of the party's gender violence task force, also publicly apologized Wednesday. She said the party apologizes for having disappointed the people, acknowledging a series of incidents of sexual misconduct by powerful DP politicians.

Park is the third major politician in the DP to become mired in sexual misconduct allegations since the beginning of the #MeToo movement. Shortly after the April general elections, Busan Mayor Oh Keo-don resigned after admitting to molesting a City Hall employee.

In 2019, the Supreme Court sentenced former South Chungcheong Governor An Hee-jung to three years and six months in prison for raping and sexually assaulting his personal assistant.

While the DP remained silent about Park’s scandal, politicians of the opposition parties, both conservative and progressive, have expressed their support for the victim. The leadership of the main opposition United Future Party (UFP) did not attend the funeral ceremony.

Instead, the UFP demanded that the prosecution start an investigation into the late mayor’s alleged abuse of power and sexual harassment. It said there will be no suspect to indict, but that the probe is still necessary to lay bare the truth.

A UFP lawmaker also proposed a bill that the prosecution must investigate an alleged sex crime after a victim files a complaint, even if the suspect is deceased after a complaint is filed.

The Justice Party (JP), a progressive minority group and a longtime ally of the DP, was split about the scandal.

Two of its first-term lawmakers, both young women, said they won’t offer condolences over Park’s death. Reps. Ryu Ho-jeong and Jang Hye-young publicly refused to mourn his death because it would be another form of attack at the victim.

Some party members expressed support for their decisions, but others abandoned the party membership to protest. The JP’s leadership, including Chairwoman Sim Sang-jeung and Floor Leader Bae Jin-gyo, made condolence calls.

And Chairwoman Sim also apologized to the people and to Park's surviving family on Tuesday for the two lawmakers’ decisions.

Her apology added kindling to the existing outrage from those supporting the victim. Rep. Jang said she was dumbfounded by Sim’s apology.

Outspoken liberal critic Chin Jung-kwon, who was formerly a JP member, also said his last piece of faith in Sim had been betrayed.