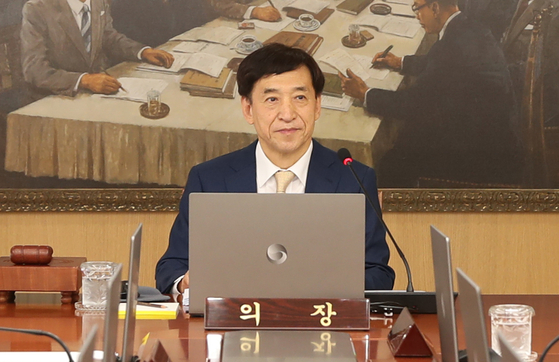 
Korea’s central bank froze the key interest rate at its record low of 0.5 percent Thursday as it gauges the effects of two previous cuts on overheated property prices and soaring household debt.

The Bank of Korea (BOK) also hinted Thursday that it could lower its economic outlook for the year, saying that this year’s GDP could go below minus 0.2 percent, its previous forecast, despite stimulus measures and supplementary budgets.

Gov. Lee Ju-yeol cited the economic impact of the coronavirus pandemic as the reason for maintaining the rock-bottom rate, which was what the market expected.

“It is inevitable [for the BOK] to keep the rate accommodative in order to respond to the coronavirus,” he said.

The central bank lowered the key interest in March and May to stimulate the economy.

The governor said the BOK's May economic growth projection was based on a scenario in which the effect of the pandemic eases starting in July, but that hasn't panned out.

Korea’s exports fell for the fourth consecutive month in June, the third month of double-digit declines in percentage terms.

According to the Ministry of Trade, Industry and Energy on Wednesday, exports in June fell 10.9 percent compared to the same month the previous year to $39.2 billion.

“The coronavirus shows no signs of slowing, to a point that some are worrying we are headed to the worst-case scenario,” Lee said. “The decline in exports has been steeper than initially expected.”

An overheated housing market and surging demand for mortgages could prevent any further reduction of the interest rate, analysts say.

“The governor expressed worries over rising property prices and household debt, signaling he will factor in both the real economy and financial stability,” said Kim Ji-na, a researcher at IBK Securities.

Korea's household debt grew at an accelerated pace in June, according to the BOK, as new bank loans owed by households rose to 8.1 trillion won ($6.7 billion) last month, up from 5 trillion won in May.

Lee stressed that real estate prices were not the sole factor in monetary policy decisions.

But if the economy further deteriorates, the central bank has few or no options in monetary policy because of the already low interest rates, analysts said.

“A further cut will be almost impossible,” said Heo The-o, an analyst at Samsung Futures, “Unless the U.S. Fed moves to implement expansionary policies or an unprecedented urgency breaks out, as it was in March [following the spread of the coronavirus], the BOK won’t go for another rate cut.”