Kakao wants you to trust it with confidential documents

Kakao wants you to trust it with confidential documents 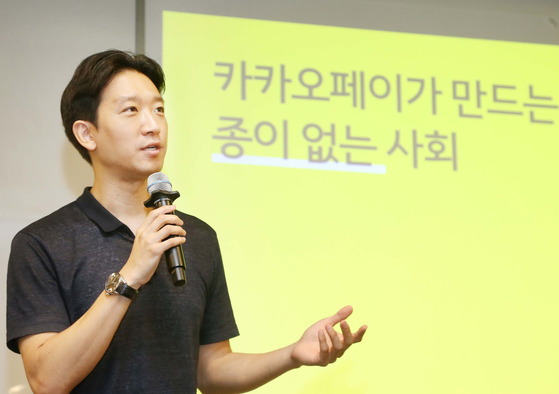 
Kakao Pay hopes to lead a paperless revolution by allowing individuals to submit and receive bills, certificates and other important documents through its messaging system.

“We expect 2020 to kick start the era of electronic document services. We plan to add more corporate partners to enlarge the market for electronic documents,” said Lee Seung-hyo, chief product officer of Kakao Pay at a press conference held Thursday at the Korean Chamber of Commerce and Industry building in Jung District, central Seoul.

KakaoPay started its electronic documents business in February 2016 — an electronic bill presentment and payment service where users can manage and pay their monthly bills through KakaoTalk.

The Kakao payment unit expanded into corporate document services in 2018. It delivers bills and documents of 100 public companies, private companies and financial institutions to general users through the messaging app. According to the company, Kakao Pay sent around 5.3 million documents for partners last year, which is double the number of documents sent when it first introduced the service.

The market for electronic documents is projected to increase to 2.1 trillion won ($1.7 billion) in size by 2023, the company said. Last year it was 93.9 billion won.

Its next step is to allow general customers to use the Kakao Talk app to submit important documents, or allow individual users to send documents to companies and public offices. This would include submitting documents for job interviews, exchanging documents for deals and sending documents when signing up for health insurance.

“We are planning to expand our business into the C2G [customer-to-government] and C2C [customer-to-customer] segments, so that our service can cover diplomas and university transcripts needed to apply for jobs and medical diagnoses submitted to insurance companies,” said Kim Jae-heon, the head of the paperless business department.

“Our long-term vision is to connect the issuer of documents and receivers through our paperless platform,” he added.

The company says that its system is secure, using the same public key infrastructure as the government for authentication certificates. It also claims to be utilizing blockchain technology to enhance security.

Kakao Pay said it issued more than 1.5 million digital identifications after the service was first offered in June 2017. The company projects the number of e-signatures to hit 20 million by next year.

Kakao’s identification system is considered a substitute for the official certificate authentication system — which has been used for decades for government websites and online banking and had long been criticized by consumers for its inconvenience. The national e-signature certificate lost its official status in November.

As of June, Kakao Pay had around 3,300 users. It projects transaction volume to grow from 70 trillion won this year to 100 trillion won in 2021.