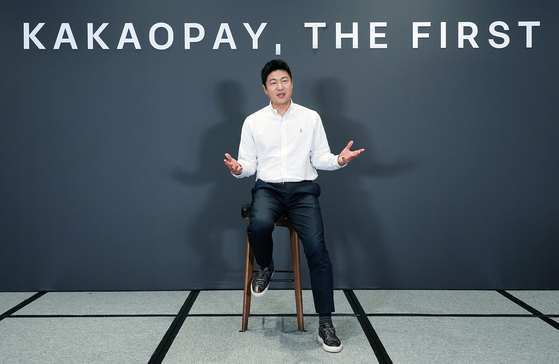 
Kakao Pay, which will start trading next week, hopes become the go-to place for financial services with a broad range of offerings, from insurance to investment advisory.

“Our ultimate goal is to enable customers to easily process various financial services using a single platform offered by Kakao Pay,” said Kakao Pay CEO Ryu Young-joon, during an online press briefing held Monday. "We plan to ramp up our share in the market leveraging our large user base and technological competitiveness."

The mobile payment provider, which will be 47.83-percent owned by Kakao and 39.1-percent owned by Alipay Singapore Holding after the listing, began selling shares to retail investors Monday after book building last week.

It is raising about 1.53 trillion won ($1.3 billion) in the offering and will be worth an estimated 11.7 trillion won when it starts trading.

Much of the money raised will go towards diversifying products and services offered.

Kakao Pay Securities, a brokerage 60-percent owned by Kakao Pay, is preparing to roll out its own mobile stock trading system at the end the year at the earliest. When the service is introduced, consumers will be able to trade Korean and overseas stocks through Kakao Pay. The brokerage so far has only been selling funds.

Kakao Pay is also preparing to start an internet-only non-life insurance company. It obtained in June preliminary approval to set up the insurer and is preparing to get final business approval. It is planning to begin operations of the insurer from early next year.

"Like we introduced fund products that investors can start investing in with 1 won, we will introduce insurance products that are relevant to people's daily lives," said Lee Jin, chief business officer of Kakao Pay.

Some of the money raised in the IPO will be used to take Kakao Pay services global.

"In the longer term, we are drawing a roadmap to go global," Ryu said. "We are building stepping stones for our global venture starting with inking partnerships with foreign fintechs."

Ryu added that the company's goal is to make overseas business a "considerable portion of our total business in five years."

According to Shin Won-keun, chief strategy officer of Kakao Pay, mobile payment services of Kakao Pay are already offered in Japan and Macao and the company plans to enter other markets in China, Southeast Asia and Europe.

"We have had many requests to cooperate on setting up financial platforms from [companies] in Southeast Asia and the Middle East," Shin said. "We will enter overseas markets after reviewing those offerings more thoroughly after going public."

Kakao Pay’s partnerships with overseas businesses will allow Korean users to pay using the mobile app abroad, as easily as they can in Korea.

"For us, the concept of global expansion means expanding the partnered shop list for Korean users so even in other countries they can just pay using our app without having to exchange their money into different currencies," a spokeswoman from Kakao Pay said.

The company has faced regulatory challenges in expanding its scope of business.

In September, Kakao Pay suspended some of its services as the Financial Services Commission said the company cannot offer fund and insurance product comparison and recommendation services after Sept. 25 as it would violate the Financial Consumer Protection Act.

"Kakao Pay has already suspended some of its services such as insurance product comparison," Shin said. "We are closely communicating with the financial authorities ... to shake off uncertainties."

Shin said risks can be turned into opportunities.

"As our services evolve to align with policies laid out by the financial regulators, we will make our business grow bigger by winning consumer trust," Shin said.

In the first half of this year, it posted a 2.7-billion-won net profit.