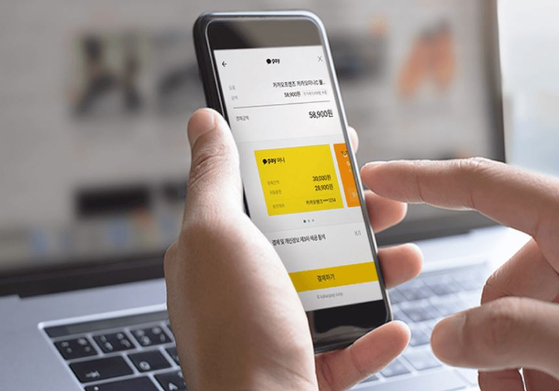 Kakao Pay's main service is supporting mobile money transfers and payments, but another pillar of its business has been recommending different investment options like funds and insurance products based on product comparisons. The product comparison service was growing as a major source of profit for the company, accounting for nearly a quarter of the company's revenue last year.

If Kakao Pay is banned from operating this service, it may have to delay its IPO. Even if it goes ahead as scheduled, it may not get the valuation it wanted.

So far, the Financial Services Commission (FSC) and the Financial Supervisory Service (FSS) are maintaining that Kakao Pay cannot offer investment product comparison and recommendation services after Sept. 25 as it will violate the Financial Consumer Protection Act.

The act, implemented on March 25 with a six-month grace period, obliges all entities that sell or broker investment products such as funds and insurance programs to register with the FSC. While Kakao Pay says it has been "advertising" investment products, rather than "brokering," the financial regulators do not agree as users can make investments via the Kakao Pay app.

As the financial authorities refuse to budge, it is becoming increasingly likely that Kakao Pay will suspend or at least hugely reduce its services related to investment product comparison.

A bigger problem is the upcoming IPO.

Kakao Pay has already postponed its IPO once as the FSS asked it to revise its securities registration statement on concerns of overvaluation of its shares. It had originally planned to go public in August.

According to a revised securities registration statement the company submitted to the FSS on Aug. 31, it is planning on listing on Oct. 14 after a two-day book building from Sept. 29. Public subscriptions are scheduled on Oct. 5 and 6.

While revising the statement, the Kakao Pay took out U.S.-based companies PayPal and Square from its comparable companies list and also lowered its offering price band from between 63,000 won and 96,000 won to between 60,000 won and 90,000 won.

The company, however, may have to postpone its IPO again.

"As Kakao Pay's major business could be changed, there is a possibility the company will have to revise its securities registration statement again," a source from a brokerage said. "If that happens, the IPO will be delayed and the company's valuation will be hit."

Kakao Pay had said last week that it has so far been operating within the legal boundaries, but from the weekend it has started to adjust its services to better align with requests by the financial authorities.

Kakao Pay confirmed Sunday that it plans to suspend a service where it compared different auto insurance products offered by six insurers. A spokesperson from the company said Sunday its funds and insurance product comparison and recommendation services will gradually be adjusted to align with the request by the financial authorities.


"Kakao Pay will abide by the government guidelines using licenses obtained by its subsidiaries," said Kim Dong-hee, an analyst from Meritz Securities. "It is not likely the service will be suspended."

An official from the FSC who declined to be named, however, said, "It is still violating the law unless Kakao Pay obtains the license itself or changes the way it operates."

If the financial authorities do not let Kakao Pay operate on licenses obtained by its subsidiaries, then it has no choice but to obtain licenses related to brokering securities, insurance products and loans.

"It would take around six months just to get the license," said Kim Hyun-yong, an analyst from Hyundai Motor Securities. "During that period, it will be inevitable for Kakao Pay to slim down its services and that would put a brake on its IPO plans."

The mobile payment service provider said that as of Friday, there are no plans to change schedules related to its IPO.