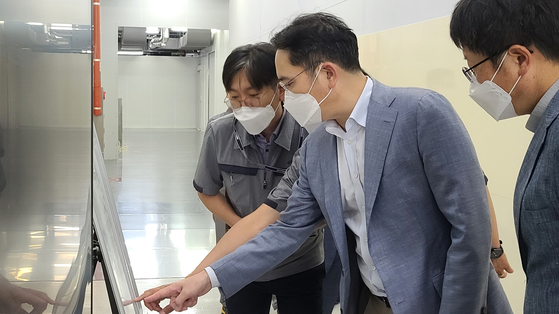 
Samsung Electronics Vice Chairman Lee Jae-yong called for the need to stabilize the supply of electric components produced by Samsung Electro-Mechanics in the face of growing demand during a tour of the parts affiliate’s production line in Busan on Thursday.

The component in question is multilayer ceramic capacitors (MLCC), a type of capacitor designed to store electrical energy in various electronic components and devices.

The production facility manufactures MLCCs for use in electronic devices and automobiles.

There has been a global shortage of parts with an explosive growth in smart devices and electric vehicles.

“Lee was briefed by executives about the development state of MLCCs for the automotive sector and smart devices and network and camera modules, followed by a discussion of mid- to long-term strategy in the face of new technologies such as artificial intelligence and 5G” Samsung Electronics said in a statement.

Lee was also quoted as saying at the site that “We should be at the forefront of spearheading innovation and not be brought down by uncertainties.”

Samsung Electro-Mechanics in talks with Tesla about cameras