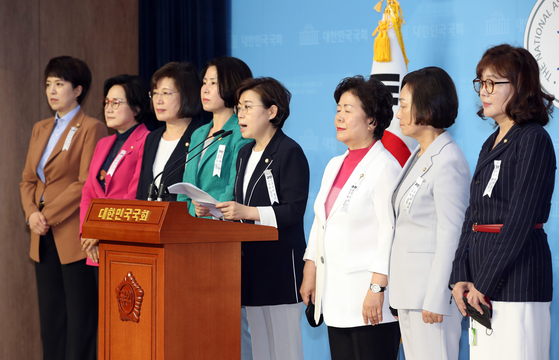 Several more aides to the late Seoul Mayor Park Won-soon were questioned by police Thursday, as investigators try to determine whether the sexual harassment accusations raised by his former secretary motivated his suicide last week.

Officers at the Seongbuk Police Precinct in central Seoul told reporters that “several people related” to the Seoul Metropolitan Government were being summoned to answer questions about the mayor’s death, without revealing any names.

Park’s former chief secretary, Koh Han-seok, was summoned Wednesday for three and a half hours. Koh is believed to have been the last person the mayor spoke with on the phone before he took his own life.

As he walked out of the police precinct, Koh told reporters that he last spoke with Park at 1:39 p.m. on July 9 — about 10 hours before Park was found dead on Mount Bukak, near his residence — but refused to reveal details of their conversation.

Police said Thursday that Lim Soon-young, Park’s special adviser for gender issues, was not summoned yet.

Multiple government sources who spoke with local media on the condition of anonymity earlier this week have raised the possibility that Lim was the first person to have told Park that his former female secretary filed a complaint with the police accusing him of sexual harassment, though Lim denies this.

Park’s former female secretary filed the complaint with the Seoul Metropolitan Police Agency at 4:30 p.m. on July 8, one day before the mayor's suicide. The mayor's actions have been construed by the main opposition party and those backing the accuser as an indication that he had knowledge of the complaint, but it remains a major mystery how Park would have learned of the complaint, if he did.

Police said they are currently only investigating Park’s suicide motive and the malicious attacks Park’s former secretary has been receiving from the mayor’s supporters. They stressed that they aren’t probing the sexual harassment complaint because the alleged perpetrator has died, leaving no one to indict.

But the accuser’s legal representatives have called on the Seoul Metropolitan Government and police to dig into the allegations nonetheless, to shed light on the victim’s ordeal. Several activists’ groups have filed complaints with the Supreme Prosecutors’ Office accusing the police and the Blue House of leaking the sexual harassment complaint to Park’s aides, and accusing Seoul government officials of dereliction of duty for ignoring calls for help from the victim.

Asked whether prosecutors would probe the accusations, an official at the Seoul Central District Prosecutors’ Office only said Thursday that “nothing has been decided yet.”

The National Human Rights Commission of Korea officially launched its own probe into the case Wednesday by assigning one of its investigators to a complaint filed by a local civic group. The complaint asked the commission to investigate Seoul government officials on suspicions of human rights violations.

On another note, the Seoul Metropolitan Government came under fire Friday for referring to the female secretary as “a person who complains of damage” Thursday while announcing plans to open an internal probe into the harassment allegations, instead of using the more common term “victim.”