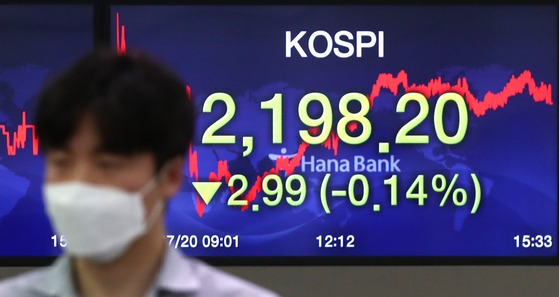 A screen shows the closing stats for the Kospi in a trading room at Hana Bank in Jung District, central Seoul, Monday. [YONHAP]


Stocks closed a tad lower Monday as investors locked in gains built on hopes for economic relief packages in major economies. The won rose against the dollar.

The index climbed 2.4 percent last week on hopes for stimulus measures in major economies, which prodded investors to cash in gains, analysts said.

Investors also kept a watchful eye on uncertainties over the additional stimulus measures under review.

"The stock market may remain on the sidelines until the U.S. stimulus bill is approved," NH Investment & Securities analyst Noh Dong-kil said.

U.S. President Donald Trump is pushing to include a payroll tax cut as part of the aid plan, raising the level of uncertainties, Noh added.

In Seoul, most large caps finished in negative terrain.

The local currency closed at 1,203.2 won per dollar, up 1.9 won from the previous session's close.