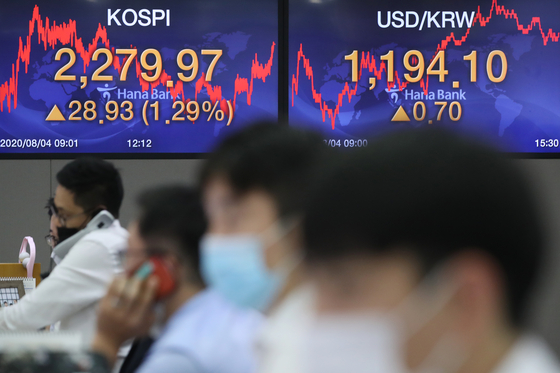 A screen shows the closing figures for the Kospi at a trading room at Hana Bank in Jung District, central Seoul, on Tuesday. [YONHAP]

Trading volume was moderate at about 713 million shares worth some 9.3 trillion won ($12.6 billion), with gainers outnumbering losers 677 to 171.

Estimate-beating July manufacturing data in the United States, China and Europe raised hopes for a global economic rebound, despite the resurgence of new coronavirus outbreaks.

The U.S. manufacturing index by the Institute for Supply Management rose to 54.2 in July, up from 52.6 in June. A reading above 50 marks expansion.

China's Caixin Manufacturing Purchasing Managers' Index (PMI) stood at 52.8 over the cited period, with an advance in key manufacturing indices in Europe as well.

"Investor sentiment was boosted by upbeat manufacturing data in both the United States and China," Seo Sang-young, an analyst at Kiwoom Securities Co., said.

In Seoul, most large caps closed in positive terrain.