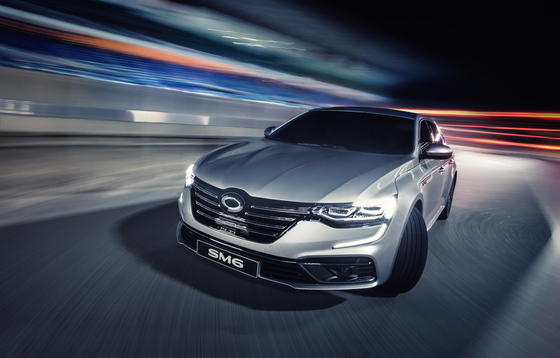 
INJE, Gangwon – At first glance, the facelifted SM6, a midsize sedan from Renault Samsung Motors, seems a lot like the model it is replacing, which was first released four years ago.

Driving two versions of the new vehicle — the TCe 300 and the TCe 260 — on a variety of courses, including a winding course through the mountains of Gangwon Province and on circuits at Inje Speedium, the reporter came to the conclusion that everything about the car except for the design has changed.

The new SM6 comes with new engines. The TCe 260 is a version equipped with a 1.3-liter gasoline engine co-developed with Germany's Daimler. The TCe 300, the more powerful one, has a 1.8-liter gasoline-powered engine, the same used in Renault’s high-performance Alpine and Renault R.S vehicles.

The TCe 300 was tested on the circuit at Inje Speedium. It was a bit concerning to drive a midsize sedan, largely preferred by older generations to use as a family car on a speed track.

Surprisingly, the automobile’s performance on a 4-kilometer (2.5 miles) track was more than enough. Its grip to the wet track was firm and stable, even while driving on a U-shaped corner on a slope at a speed near 100 km/h. The car’s response to the accelerator and the brake pedal were gentle but responsive.

It is rated at 225 horsepower and 30.6 kilogram-meters of torque. The automaker claims that it is more powerful than rivals in the same segment, such as the Hyundai Motor’s Sonata and Kia Motors’ K5.

A winding and straight course extending 60.6 kilometers through the Seoraksan area was driven in the TCe 260 version. Even if it is a lighter version, it delivered enough power to soar through curves and straightaways. 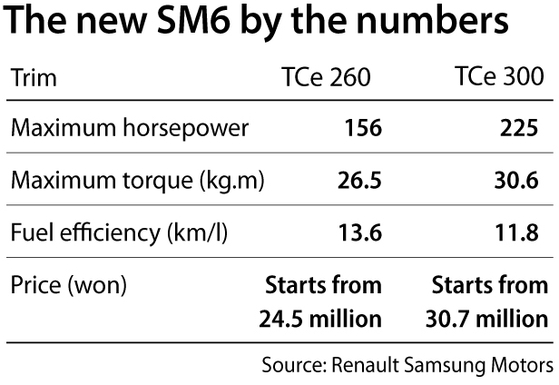 The vehicle stayed quiet throughout.

Its upgraded advanced driver assistant system (ADAS) came in handy when changing lanes. The facelifted SM6 came newly equipped with lane centering assist and lane keeping assist, which according to the automaker is similar to Level 1 autonomous driving.

The newly added features weren't much help in the countryside, where I had to dodge construction sites and agricultural equipment.

Whenever the reporter tried to get around the obstacles, which at times meant crossing the lanes, this steering wheel wouldn't budge. It would send alarms and vibrate and do all sorts of things to keep the vehicle in the center of the lanes even if it meant crashing into obstacles.

It took all my strength to beat the vehicle's ego and get it to drive in a face manner.

The automaker explained it upgraded the car’s rear suspension and sound-absorbing materials to soften the driving feeling and make the vehicle quieter on roads, two features that Korean customers consider important when buying a car. They were also the biggest two complaints about the previous version, the automaker admitted.

The full-day test drive session proved that the automaker accomplished the mission.

Sales of SM6, globally known as Talisman, didn’t live up to Renault Samsung’s expectation so far.

“We hope the facelifted SM6 will revitalize sedan segment for Renault Samsung once again,” a spokesman for the automaker said.