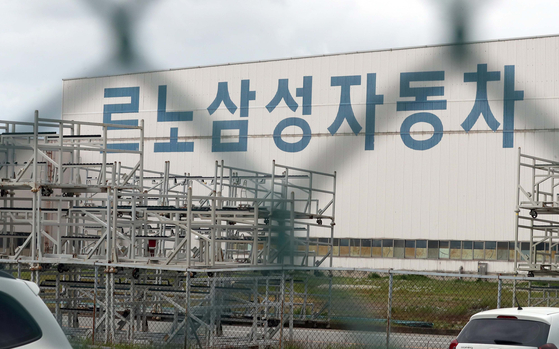 Renault Samsung Motors locked out striking workers on May 4, saying that they will not be allowed back into the Busan factory until they abandon the strike.

Salaries are suspended for those locked out.

This is the third year in a row in which management has prevented striking workers from entering the factory.

The company said it is accepting all who are willing to work and allowing them back in. On Wednesday, 79 percent of the 1,900 employed at the site showed up and were put back to work. The factory ran at about 50 percent of normal that day.

"The lockout has been done to defend against any spontaneous acts by the union," said a spokesman from the auto company, adding that the lockout’s end has not been determined.

Renault Samsung Motors had one of its worst years in 2020, recording a net loss of 72.5 billion won. It is the first time in eight years the company has went into the red. From early this year, the company has been offering voluntary retirement packages, cutting executive-level employees and reducing salaries.

Dominique Signora, chief executive officer of the Korean unit, reportedly said in a letter sent to employees and executives on May 3, saying that the company will not have another chance if it misses the opportunity to show its cars right now.

Jose Vincente de Los Mozos, a senior executive from Renault headquarters, warned in February that if the Busan facility doesn’t become more efficient, it will no longer be used for the manufacturing of the XM3, an export model.

In response to the company's lockout decision, unionized workers said they will go on a full-fledged walkout for an indefinite period of time until the management withdraws the decision and makes a new wage offer.

"We cannot go down on our knees and give in to the management's filthy threat of locking us out from our workplace," the union said in a letter sent out to its members.