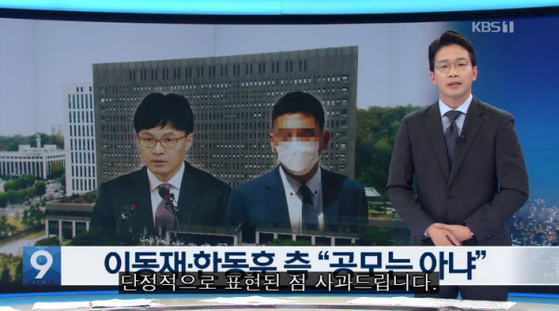 Public broadcaster KBS on its 9 p.m. news program issues an apology for running an unconfirmed story about an alleged extortion attempt by a senior prosecutor and a detained former reporter. [SCREEN CAPTURE]


Public broadcaster KBS issued an apology on its 9 p.m. news program for running an unconfirmed report alleging that a senior prosecutor aided a former reporter now under arrest in their attempt to incriminate a media personality close to the administration.

Former Channel A reporter Lee Dong-jae was placed under pretrial detention Friday for attempting to extort a convicted executive to obtain incriminating information on Rhyu Si-min, a liberal pundit, in alleged collusion with Han Dong-hoon, a senior prosecutor and close ally of Prosecutor General Yoon Seok-youl.

On Saturday, public broadcaster KBS ran an investigative report based on content of a recorded conversation it said it had obtained between Lee and Han at the latter’s office in Busan in February.

The report alleged the two figures conspired during that meeting to implicate Rhyu in a financial scandal by using testimony from the jailed businessman, Lee Cheol. The report cast the conspiracy as an attempt to sway the results of the upcoming April general election in favor of the conservative opposition.

Without revealing its sources, KBS claimed Han had given Lee his support and encouraged the reporter in his project to take down Rhyu.

But both Lee and Han protested the KBS report, with the latter calling it “malicious” and filing a criminal complaint against the broadcaster for libel on the basis of false information. Han’s legal team said they would only consider retracting the complaint if KBS revealed the sources that prompted its report.

Lee’s lawyers, who also threatened legal action against KBS, disclosed part of the recording on Tuesday, claiming there was no mention of the general election nor of the opposition in the conversation.

On its 9 p.m. news program Sunday, KBS apologized for the report, saying some of its “not completely verified” content was “expressed in conclusive language.”

The broadcaster’s labor union on Tuesday also slammed the report, accusing KBS of acting as the administration’s “propaganda speaker” and demanding the company’s president reveal how the report came to be.

Lee was grilled by district prosecutors investigating his case on Tuesday for the first time since his detention last week. Han has yet to comply with the prosecution's requests to question him, insisting the case has been engineered by certain political forces bent against him.

Tuesday also marked the first time prosecutors looking at the case questioned a reporter from another public broadcaster, MBC — the first to report on the alleged collusion between Lee and Han on March 31.

The reporter, Jang In-soo, and several other employees at MBC were sued by a right-wing civic group for defaming Lee and Han with the collusion claim, as well as by former Finance Minister Choi Kyung-hwan for saying Choi was also mentioned as one of Lee’s targets in his alleged extortion of the businessman.

Time to clear the suspicion