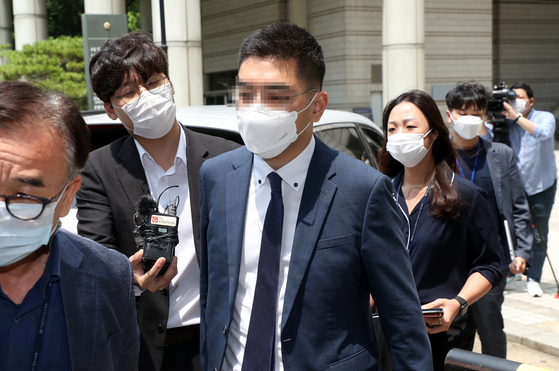 Channel A Reporter Lee Dong-jae, center, exits a courthouse after attending a hearing on a warrant for his arrest over allegations that he colluded with a high-ranking prosecutor to implicate a ruling party-affiliated media personality. [YONHAP]


A former broadcasting reporter accused of conspiring with a high-ranking prosecutor to take down a government-friendly media personality was placed under arrest on an attempted extortion charge Friday, strengthening the Justice Ministry’s hand in its ongoing struggle to check the power of the state prosecution service.

The Seoul Central District Court accepted prosecutors’ request for pretrial detention of Lee Dong-jae, who was fired by Channel A last month, on the basis that he might try to tamper with evidence in the case.

“There is significant evidence to suspect the suspect attempted to align himself with a high ranking prosecutor to threaten the victim in order to achieve his reporting goals,” said Kim Dong-hyeon, the presiding judge over the warrant hearing.

“Placing the suspect under pretrial detention while under investigation is deemed inevitable under current circumstances, for the sake of uncovering the truth and restoring trust in the media and the state prosecution service.”

Lee is accused of working with Han Dong-hoon, a senior prosecutor and close ally of Prosecutor General Yoon Seok-youl, to blackmail a convicted executive to obtain incriminating information on Rhyu Si-min, a liberal pundit with close ties to the Moon Jae-in administration.

On Saturday, public broadcaster KBS ran an investigative report claiming that the content of a recorded conversation between Lee and Han at the latter’s office in Busan in February was the decisive factor in the court’s decision to detain Lee.

The report alleged the two figures conspired during that meeting to implicate Rhyu in a financial scandal by using testimony from the jailed businessman, Lee Cheol, in an attempt to sway the results of the upcoming April general election in favor of the conservative opposition.

The implication was that should the conservative United Future Party win, it would assist the state prosecution service under Yoon to weaken the Moon Jae-in administration’s drive to curb the powers of state prosecutors.

Lee Dong-jae’s legal team vehemently denied the allegations, claiming KBS reported on content that was “completely different” from what had actually been discussed that day between the two figures.

Han too denied the KBS report, saying its content was “completely false and a mere fabrication.” The prosecutor, who was formerly deputy head of the Busan High Prosecutors’ Office, has also refused to comply with the official investigation into the scandal, claiming the entire case is a machination engineered by certain political forces and the media.

Lee’s arrest is likely to further strengthen the prosecution’s case into the allegations, which appear to corroborate longstanding claims that state prosecutors and the media share a chummy relationship that has compromised the impartiality of reporting on high profile cases pursued by the state prosecution agency.

The former reporter’s detention also marks a victory of sorts for Justice Minister Choo Mi-ae, who has been embroiled in a feud with Prosecutor General Yoon over the latter’s efforts to rein in the ongoing investigation into Han.

After Yoon launched an advisory panel to review the validity of the investigation into Han — a move widely seen as an attempt to protect his close associate — Choo issued a rare order that eventually forced the prosecutor general to shut down the review and grant the probe into Han with greater independence, albeit reluctantly.