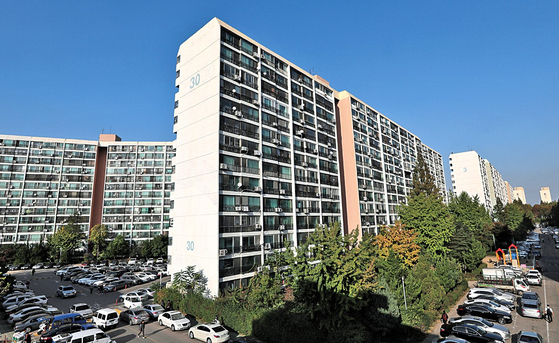 
Property taxes increased the maximum 30 percent this year for 580,000 households in Seoul.

According to the United Future Party (UFP) Rep. Kim Sang-hoon, using estimates based on data submitted by the Land Ministry and the Seoul Metropolitan Government, the number of households whose property taxes paid to local governments increased by the maximum annual limit in 2017 was 40,541. This figure will likely surge in 2020 to 576,294.

In just three years under the Moon Jae-in government, the number of households whose property tax burden surged by the maximum limit has increased 14-fold.

The total tax increased not only because of rising property values but also because of a change in the way the government calculates assessed values. In 2017, 65.6 percent of the market value of a property was used to arrive at assessed values in Seoul.

The rate has increased, especially for more valuable properties.

According to the Land Ministry, the government-assessed value announced in March for apartments between 900 million won ($752,000) and 1.5 billion won, which was previously below 70 percent of the market value, has been raised to 80 percent.

As a result, the average government-assessed value of apartments in Seoul this year rose 14.73 percent, the sharpest increase in 13 years. 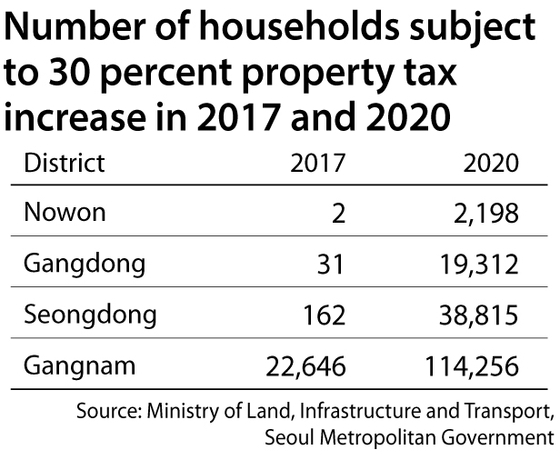 For apartments with worth less than 300 million won, property tax increase is capped at 5 percent, while for those between 300 and 600 million won, the cap is 10 percent.

The government has implemented measures that increase the real estate tax in order to cool the housing market. It reiterated that the regulations target multiple-home owners and short-term investors by increasing the tax burden for speculative transactions. Criticisms followed, as the higher taxes have hit single homeowners who plan to live in their properties.

Gangdong District, where new large-scale residence complexes have been built, such as the Godeok Jugong Apartments, the number of households faced hit with the maximum increase went from 31 households in 2017 to 19,312 households this year. The total tax collected increased 1,158 times, from 13.6 million won to 15.8 billion won.

Mapo, Yongsan and Seongdong districts were not exempt from the impact of the massive property tax increases. In Mapo District, 31,276 households were hit by the maximum increase, up from 289 in 2017. In Yongsan District, 28,017 households hit the cap, from 584. In Seongdong District, property taxes went up by the limit for 38,815 households, up from 162.

In Nowon District, northern Seoul, the percentage of affected households increased the most. The number of households in Nowon faced with the maximum tax hike went from two in 2017 to 2,198 this year. The tax levied went up by 1,476 times in three years, from 870,000 won to 1.3 billion won.