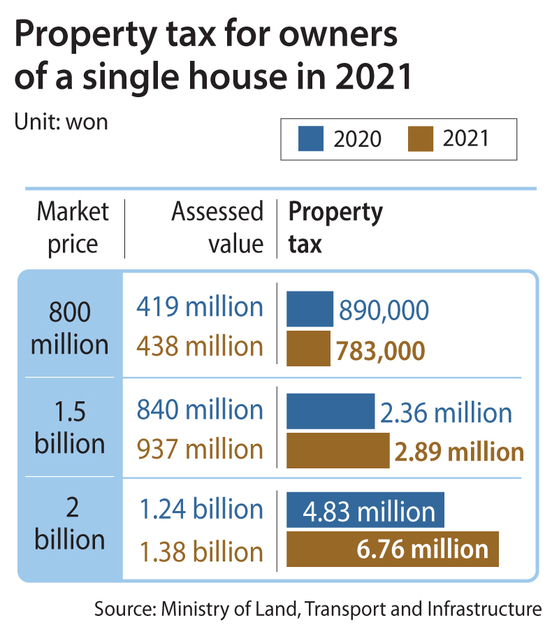 The government-assessed value of standalone houses in Seoul will increase 10.13 percent next year, higher than this year’s increase of 6.82 percent from 2019. The average increase for the nation is 6.68 percent.

The Ministry of Land, Infrastructure and Transport said it will start receiving feedback regarding next year’s assessed values on Friday, and 230,000 houses among the total 4.17 million houses will be reviewed. This year’s sample released Friday includes 10,000 more households than last year. The Board of Audit and Inspection of Korea in May called out the ministry, saying that it should increase the number of standard houses for the zoning districts to better reflect reality.

The assessed value to the market value ratio increases at a steeper rate for higher-end residencies on the road to reaching the goal of 90 percent. For houses below 900 million won ($819,000), the ratio will increase from 52.4 percent this year to 53.6 percent next year. For those that fall in the 900-million-won to 1.5-billion-won range, it will rise from 53.5 percent to 57.3 percent. Above 1.5 billion won, the ratio will be 63 percent next year, up from 58.4 percent this year.

“From 2021 to 2023, the assessed value to the market value ratio for residencies below 900 million won will catch up to the ratios of higher priced apartments,” said the Land Ministry.

According to the government’s plan, the assessed value for standalone houses priced higher than 1.5 billion won in the market will reach 90 percent of the market value by 2027. For houses in the 900-million-won to 1.5-billion-won range, it will happen in 2030, and for those below 900 million won in 2035. The controversy around fairness of the government-assessed value is likely to continue. If the ratio continues to rise, the situation where people need to pay more taxes despite falling housing prices may occur because market prices for houses constantly change.

According to a simulation done by the Land Ministry, a person who owns a 1.5-billion-won residence will be charged with 2.73 million won of property tax, 15 percent higher than 2.37 million won this year. Combined with the comprehensive real estate tax, which the homeowner will pay for the first time next year, the total amount of tax will be 2.89 million won.

Although the costs of owning property are generally increasing, the property tax rate for owners of residences below 600 million won will be reduced by 0.05 percentage points for three years. Hence, the government-assessed value for an 800-million-won apartment will rise by 4.6 percent from 419 million won this year to 438.3 million won next year, but the property tax goes down from 890,000 won to 780,300 won, a 12 percent decrease.

When the assessed value to the market value ratio increases, the burdens for tax as well as insurance fees increase as well. According to the National Health Insurance Service, when government-assessed values rise 30 percent, health insurance premiums increase 13.4 percent on average. This may lead to some elderly people failing to qualify for the basic pension, as it is based on income and assessed value of homes.

As the tax burdens have been increasing, criticism has been mounting in online communities, with commenters saying that the government is more capable of levying taxes than it is of reining in the housing prices.

“The government gave us 1 million won of emergency relief and took away 10 million won,” said a statement posted online. “Does the government want an income-less retiree to sell their single house?”

Real estate experts fear that tax shifting will happen — the homeowner, who faces increased taxes, could transfer the burdens to the tenants by raising rents.

“When there are more landlords who switch to monthly rent from the jeonse long-term rents in the midst of the jeonse war, the prices of jeonse and rents can continue to increase for a while,” said Kwon Dae-joong, a real estate professor at Myongji University.

“When the number of landlords preferring monthly rent increases, the instability of the real estate market can continue due to the tenants that are unable to find houses,” said Kim Yeon-hwa, head of the real estate department at IBK.