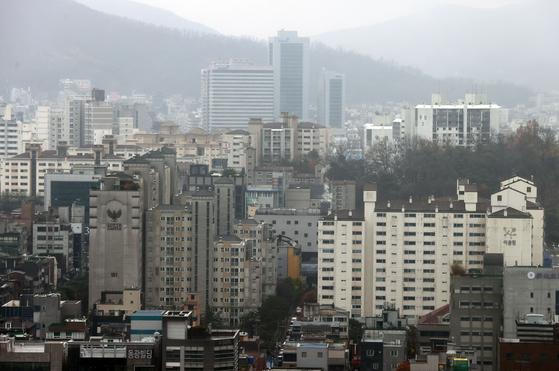 A view of apartments in Gangnam District, southern Seoul, on Nov. 19. [YONHAP]

A 66-year-old man who lives in Mok-dong of Yangcheon District, western Seoul, was shocked recently after checking his comprehensive real estate tax bill. It was up sevenfold.

He owns two apartments including his current residence. They were purchased using severance pay, with rent from the second unit to be used for living expenses.

“Some people might say the amount is so little for me as a person who owns two apartments. However, I’m really confused now receiving the bill when I’m not earning any money at the moment,” Park said. “I want to sell one, but then I'll be obliged to pay a large amount of capital gains tax, and I would lose a way to make a living.”

On Nov. 20, the National Tax Service started sending this year’s comprehensive real estate tax bills to homeowners. The homeowners can check the bills right away online, or they will receive the bills in the mail around Nov. 26.

The comprehensive real estate tax is a national tax targeting expensive residential real estate and some kinds of land. It is separate from property taxes levied by local governments.

The increase in the government’s assessed values of the real estate is the major reason behind the jump in comprehensive real estate tax.

The assessed values of all apartments this year rose 5.98 percent compared to the previous year. The rise in Seoul was the sharpest, where the change was 14.73 percent.

The situation is most evident in the Gangnam District, Seocho District and Songpa District, all in southern Seoul, and Mapo District, Yongsan District, and Seongdong District, along the northern side of the Han River. The assessed values of apartments that are priced 3 billion won or above there jumped nearly 30 percent on year.

The amount of total tax collected also jumped. The collections amounted to some 4 trillion won, a 19.5 percent increase year-on-year.

The number of people liable to pay with the comprehensive real estate tax has risen rapidly under the Moon Jae-in government.

People who own relatively expensive apartments are being hit hardest.

A homeowner who owns a 112-square-meter Acro River Park apartment in Banpo-dong in Seocho District needs to pay about 9.76 million won in comprehensive real estate tax this year. Last year, the tax obligation was only about 5.72 million won.

For a person who has a 235-square-meter flat in Hannam The Hill in Hannam-dong, central Seoul, which is trading at about 6 billion won, this year’s comprehensive real estate tax obligation would come to about 22.24 million won, up 45 percent on year.

“Particularly those who are aged or who had retired and have no other means to earn money will take a direct hit” Park Won-gab, a senior real estate analyst at KB Kookmin Bank, said.

Park also said “the homeowners who are heavily burdened by the taxes will be most likely to shift their jeonse [long-term housing rental deposit] apartments to monthly rents [to secure cash].”

The government in July announced its plan to raise the maximum rate of comprehensive real estate tax to 6 percent from the current 3.2 percent. The new tax rate will be applied starting next year.

For a person who only owns a single 120-square-meter apartment flat in Dogok Rexle apartment complex in Dogok-dong, Gangnam District, this year’s comprehensive real estate tax obligation will come to 2.73 million won. Under the new tax rate, it will be 5.09 million won next year.

A homeowner with a 119-square-meter apartment flat in Jamsil LLL's complex has to pay 2.22 million won of tax this year, and it will increase to some 4.4 million won next year.

The government in early November also announced that it will raise the assessed value of apartments, which will increase the tax bills. The plan is to raise assessed values to 90 percent of market price over the next 10 years.

"As the assessed value tends to be lower for the low-priced properties, if the assessed value is to be raised to 90 percent of the market values, people who own low- and middle-priced apartments will face a heavier burden," said Ahn Myung-sook, a senior manager at Woori Bank’s real estate consulting center.

“If [the government] wants to raise the comprehensive real estate tax, it must lower the rate of the transaction tax and offer people an escape in order for the stabilization in real estate market,” said Woo.