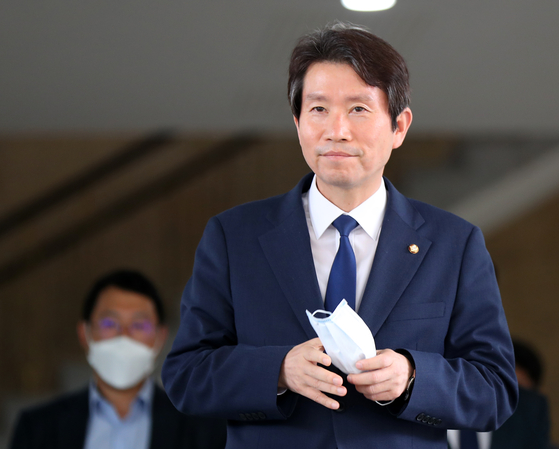 
Unification minister nominee Lee In-young said he hoped Seoul and Washington would postpone combined military exercises this summer for the sake of diplomacy with North Korea.

In an off-the-cuff interview with reporters, Lee said the “most important” priority at the moment was to “restore dialogue with North Korea,” for the sake of which he vowed to pursue “very bold change,” including proposing the suspension of joint military exercises with Washington.

“There is also the factor of Covid-19, which I hope is considered along with the Ministry of National Defense’s requests to arrive at a flexible and strategic judgement [on the joint drills issue],” Lee said.

“Personally, it is my belief that it would be better if [the exercises] were postponed.”

The nominee, however, acknowledged the drills were an important factor in the Defense Ministry’s goal to take back wartime operational control (Opcon) from the United States by the end of President Moon Jae-in’s term in 2022, making them difficult to bypass this year.

South Korea and the United States conduct a variety of combined military exercises each year, which North Korea regularly condemns as rehearsals to invade its territory. Many of these drills were postponed or scaled down in the last two years to support diplomacy with Pyongyang, but renewed hostility from the regime has bolstered calls in Seoul and Washington for their resumption.

According to Seoul’s Defense Ministry, the allies’ defense chiefs spoke on the topic of the exercises on Tuesday, agreeing to “unwaveringly” pursue the Opcon transfer goals.

Lee, as South Korean President Moon Jae-in’s pick to head Seoul’s top inter-Korean body, spoke for officials in the administration anxious that conducting the exercises could further aggravate an already deteriorating relationship with the North.

The nominee, however, was less compromising on the question of the so-called South Korea-U.S. working group, a consultative body that was originally set up to coordinate North Korea policy between the allies, but which has been criticized for restraining Seoul’s diplomatic options to those permitted by Washington.

South Korea must independently decide which issues should be left up to consultation through the working group and which it should deal with on its own with Pyongyang, Lee said, reiterating comments he made in the past signaling a desire to break free of constraints imposed by the body.

“For example, I think things we eat, things that hurt, and things we want to see before we die — or to put it simply, things pertaining to the field of humanitarian exchanges — are policies we can pursue on our own,” Lee said.

Pyongyang has objected intensely to Seoul’s commitment to the working group, calling it a sign of South Korea’s subservience to the United States.

As to concrete solutions to the crisis in relations with the North, Lee noted that trade on a small scale could help alleviate the dire need of people in the North, which he suggested could be amplified in the future once sanctions forbidding larger scale trade are lifted.

Instead of cash transfers, which would go against sanctions, Seoul could conduct “item-for-item exchanges” with Pyongyang, “for example, water from Mount Paektu or liquor from the Taedong River for rice and medicine.”