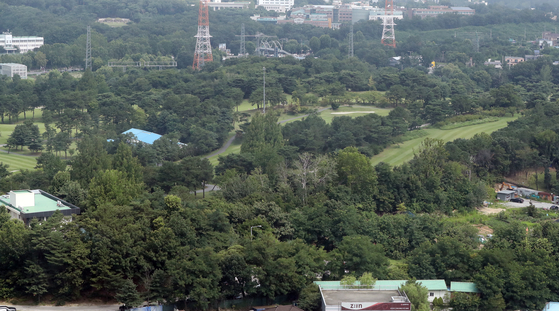 
President Moon Jae-in’s order to develop a military country club in Seoul to build more apartments amid skyrocketing housing prices stirred up fresh controversy on Tuesday, as it contradicts his other instructions to preserve greenbelt zones.

During a meeting with the prime minister on Monday, Moon said he has decided to maintain greenbelt zones — areas where development projects are strictly prohibited in order to bring open spaces to city centers — for future generations. His remarks effectively ended weeks of speculation that the government would lift the development bans to supply more homes and cool the housing market.

During the same meeting, Moon also discussed with Prime Minister Chung Sye-kyun a plan to develop publicly-owned land, including Taereung Country Club in Nowon District in northern Seoul. The facility, however, is located inside the greenbelt area.

The country club, built in 1966, is part of the Korea Military Academy. The site, spanning 82.6 hectares (204 acres), is located adjacent to the military academy.

Rep. Kim Jin-pyo of the ruling Democratic Party (DP) earlier said the site is large enough to build up to 200,000 apartments. It is also located near public transportation, including Seoul's subway line No. 6.

Although the land is owned by the Ministry of National Defense, developing it would require permission from the Seoul Metropolitan Government.

In 2018, the Moon government reviewed a plan to change the zoning of the country club and build homes, but scuttled the plan after the city government and ministry protested.

On Tuesday, users of online real estate forums increasingly criticized Moon’s orders. They argued that the plan to lift the country club's greenbelt restriction would further increase home prices in Gangnam, a district in southern Seoul with one of the fastest-rising housing prices.

“The president is saying that he will preserve the greenbelt zones in Gangnam for future generations, while lifting the greenbelt in Gangbuk [north of the Han River],” one Internet user wrote in a post to a Naver forum. “He is saying he will only make Gangnam a good place to live.”

Another online community user accused top officials and politicians of pressuring people with multiple residences to sell homes while keeping their own homes in Gangnam.

According to the Citizens' Coalition for Economic Justice (CCEJ), the average apartment price in Seoul went up from 842 million won ($702,477) to 1.292 billion won in the last three years, a 54 percent increase since Moon took office in May 2017. This is the largest increase that's occurred under any Korean president.

A petition was also filed to the Blue House’s online petition system on Tuesday, demanding that the government maintain the greenbelt restrictions for the Taereung Country Club. As of 2:20 p.m., it accumulated 2,760 signatures. A presidential official will reply to a petition that receives over 200,000 signatures over one month.

The petitioner wrote that the country club is the only large block of greenbelt space inside Seoul. Stressing that it remained undeveloped for over a half century, the petitioner said it must be preserved for future generations.