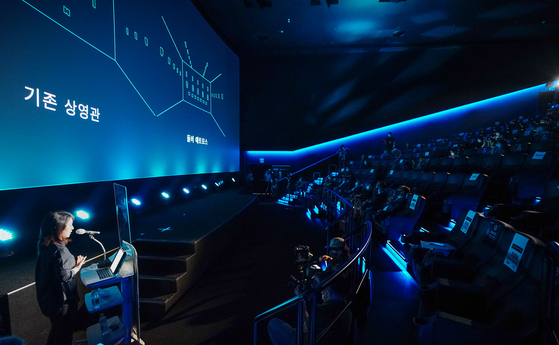 The new Dolby Cinema screen at the Coex branch of Megabox in southern Seoul, on Wednesday. [DOLBY CINEMA]


Megabox has installed Dolby Cinema, a premium theatrical format said to rival IMAX, at its Coex branch in southern Seoul.

The Coex screen is the first in the country to be fitted with Dolby's complete cinema set-up, which includes its high-resolution, dual 4K laser projector Dolby Vision and spatial audio system Dolby Atmos.

Megabox isn't the first company to install a premium cinema set-up. CGV has previously teamed up with IMAX, installing screens at 18 theaters nationwide.


Megabox plans to open more Dolby Cinema screens at Starfield Anseong in Gyeonggi in September and Hyundai Premium Outlet in Namyangju, Gyeonggi, in November. Watching a movie on the screen at the Coex branch, with 378 seats, will cost 17,000 won ($14).

Acknowledging the deteriorating effect of the coronavirus pandemic on the theater industry, Megabox expected the new technology to breathe new life into the troubled sector.

“It is true that movie theaters are going through hard times,” said Kim Hyun-soo, managing director of the cinema's multiplex division.

“We came up with the idea of providing a premium screen long before the coronavirus broke out. Still, we believe that the attempt could help revive the industry in the coming years as we expect a turnaround next year,” the managing director said during a press event on Wednesday.

Doug Darrow, senior vice president of the cinema business group at Dolby Laboratories, celebrated the launch while noting the growing influence of the Korean film market.

“With the Korean film industry rising on the global stage, I’m pleased to see the official launch of the first Dolby Cinema in Korea,” he said in a statement.

Kim Jin-sun, CEO of Megabox, said that the chain will keep on adding the format to more branches in the future.

“With the launch of Dolby Cinema as a key driver for growth, we will take a leap forward and exert our best possible efforts to maximize consumer satisfaction by adding new Dolby Cinema locations and delivering diverse content,” Kim said in the statement.