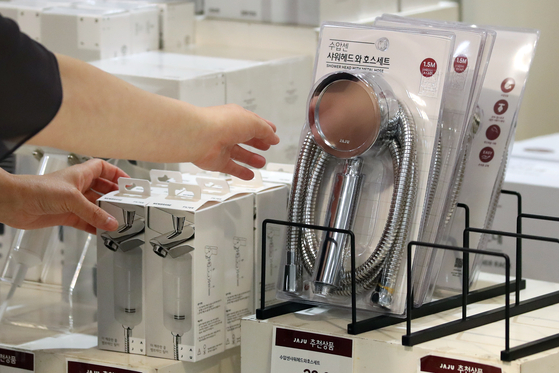 
Since worm-like organisms were found in water treatment plants, sinks and showers, demand for bottled mineral water and filtered shower heads has skyrocketed.


Demand was particularly strong in Incheon, where bugs were reported in actual homes.

Since the first case was reported in Incheon on July 9, the larva-like organisms were found in purification facilities in Gyeonggi’s Hwaseong, South Gyeongsang’s Gimhae, Yangsan and Uiryeong, and Ulsan.

More than 700 complaints related to bugs in tap water have been filed.

Retailers both online and offline are chasing in on bug phobia.

From July 13 through July 21, Lotte Mart saw sales of pull-out spray faucets for kitchen sinks with filters spike 209.7 percent compared to the same period in the previous month. Sales of water filters jumped 187 percent while sales of filtered shower heads went up by 94.1 percent during the same period. Sales of bottled mineral water increased 10.5 percent.

Homeplus doubled its stocks of filtered shower heads. It also started offering promotions of such products at 140 stores nationwide since Tuesday.


Sales of the products at Homeplus outlets in Incheon jumped 265 percent on year from July 13 through July 19, while sales in the surrounding province of Gyeonggi rose 67 percent during the same period.

Shares of Kwangdong Pharmaceutical, which sells the best-selling bottled water brand Jeju Samdasoo, jumped 26.73 percent on Monday to 10,100 won ($8.50). Its shares closed at 10,300 won on Wednesday, a 0.98 percent rise from the day before.

Restaurant operators, on the other hand, are worried about people’s fears of being served unclean water. They claim on top of the continued spread of Covid-19, people will avoid eating out even more than ever.

“I don’t think I’ll be able to dine out for a while,” one commentator wrote on an online bulletin board for mothers living in Cheongna in Incheon last week. “Hygiene at restaurants can’t be as well managed as it is at home.”