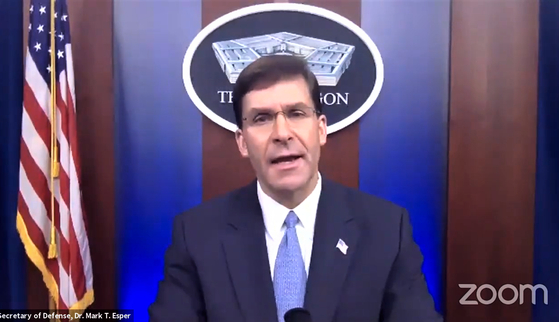 
U.S. Secretary of Defense Mark Esper on Tuesday said he issued no orders to withdraw troops from the Korean Peninsula, but added the Pentagon was considering “adjustments” to its military presence around the world — including Korea.

In a remote address to the International Institute for Strategic Studies, Esper said he preferred rotational deployments of U.S. troops into global theaters, as opposed to permanent stationing, “because it gives us, the United States, greater strategic flexibility in terms of responding to challenges around the globe.”

The remark was given in response to a Wall Street Journal report last week saying that the Trump administration is mulling over reducing its military presence in Korea to below the current 28,500 personnel. The two allies are currently in a deadlocked disagreement over Trump’s demand that Seoul foot a larger burden for the upkeep of the U.S. Forces Korea (USFK).

While he stressed no order was given to withdraw forces from Korea, Esper said he was committed to implementing the “National Defense Strategy,” part of which meant ensuring U.S. combatant commands were “optimized and positioned as well as possible” to accomplish regional missions.

“So we will continue to look at the adjustments, at every command we have in every theater, to make sure we are optimizing our forces,” the secretary added.

Rotational deployments appear to be a major component of a concept security planners in the Trump administration, including Esper and his predecessor, Jim Mattis, have pushed for in recent years, called “dynamic force employment.”

According to a summary of the Pentagon’s 2018 national defense strategy, Washington's dynamic force employment “will more flexibly use ready forces to shape proactively the strategic environment.”

When asked about Esper’s comments, Pentagon spokesman Johnathan Hoffman said the examinations into the troops' presence in Korea will be a “continuous process” that the United States will conduct in conjunction with allies.

“We’ll have recommendations that we may make in the future,” he added.

Just last month, Trump announced he was cutting the number of U.S. troops in Germany by about half, citing Berlin’s “delinquent” payments for its share of defense costs. The actual order, however, mandated the removal of 9,500 of the 34,500 troops in Germany.

That announcement triggered deep concerns in Seoul that Korea would be next on Trump’s list, given his obvious discontent with past cost-sharing arrangements on the USFK.

In negotiations that have dragged on for almost a year now, Washington is reportedly requesting $1.3 billion a year, down from its original demands of $5 billion, while Seoul said its best offer is 13 percent more than what it paid last year, or around 1.17 trillion won ($965.6 million).

Departing from past U.S. presidents, Trump has repeatedly questioned the necessity of keeping troops on the peninsula, in spite of the general consensus in America’s defense community that the U.S. troops' presence in Korea provides a check on an increasingly aggressive China.

Seoul has striven to downplay any suggestion that a U.S. troop reduction is in the works. After a phone conversation between the two countries’ defense chiefs on Tuesday, which concerned combined exercises as well as the upkeep issue, Korea’s Ministry of National Defense said that no discussions took place on a possible reduction of the USFK.