Seoul and Washington are working to hold a videoconference between the two countries’ defense chiefs next month, during which they are expected to discuss their defense cost-sharing agreement, Korea's Ministry of National Defense said Tuesday.

Korean Defense Minister Jeong Kyeong-doo and U.S. Secretary of Defense Mark Esper had planned to meet in early June at the Shangri-La Dialogue, the regional security forum held annually in Singapore which was canceled this year due to the coronavirus pandemic.

“Discussions are under way to hold a Korea-U.S. defense ministers' meeting through videoconference,” Defense Ministry spokesperson Choi Hyun-soo said in a briefing Tuesday, adding that the exact date and agenda are still in talks.

She added, “The Shangri-La Dialogue has been canceled because of Covid-19, but we are planning a videoconference because the two sides shared an understanding that we would like to carry on with the yearly custom.”

Negotiations between the two countries to finalize the 11th Special Measures Agreement (SMA) have remained deadlocked recently. The previous deal expired on Dec. 31. Consequently, around 4,000 Korean workers supporting the U.S. Forces Korea have been subject to an unprecedented furlough since April 1.

The two sides had reportedly reached a tentative agreement in late March in which Seoul offered to increase its share of the costs by 13 percent, but U.S. President Donald Trump rejected the proposal and demanded Korea pay more. At the time, Esper and U.S. Secretary of State Mike Pompeo had reportedly supported the 13 percent increase.

In the 10th SMA, a one-year deal signed in February 2019, Seoul agreed to pay 1.0389 trillion won, which amounted to about $920 million at the time. Negotiations for the 11th SMA kicked off last September, and the Trump administration initially demanded a fivefold increase in Korea’s contribution for stationing some 28,500 U.S. troops on the peninsula.

Esper is expected to again call for an increase in Seoul’s contribution in the upcoming talks with Jeong.

Along with the SMA, the two defense chiefs will likely discuss North Korea and other regional security matters, including combined readiness posture and preparations for the transfer of the wartime operational control, or Opcon, defense officials said Tuesday. 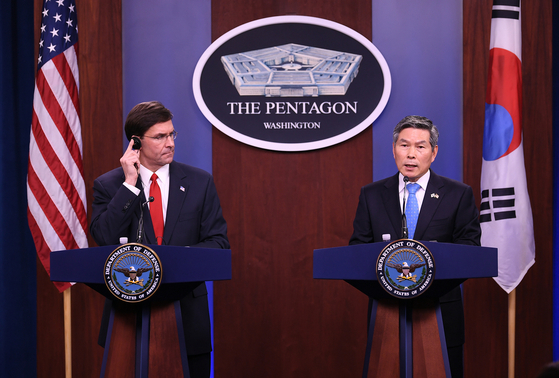 A videoconference between the three countries’ defense ministers is also in the works for next month.