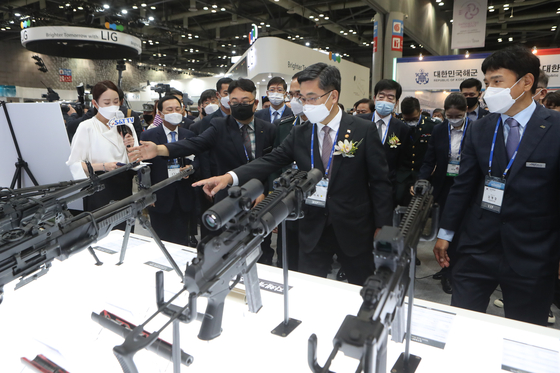 
Almost 80 percent of Korea's 100-trillion-won ($91 billion) budget for defense capacity building over the next five years will be spent on developing its domestic arms industry, Minister of National Defense Suh Wook said during a military exposition Wednesday.

Suh characterized the defense industry as a key engine of economic growth and the basis for responsible security, in his remarks delivered at the Defense & Security Expo (DX) Korea 2020 conference in Goyang, Gyeonggi.

Noting Korea's advancements in technologies like drones, robots and artificial intelligence, the minister pledged to actively nurture domestic arms manufacturers so that they can lead the world in producing and exporting cutting-edge military hardware.

According to the Defense Ministry's budget blueprint covering 2021 to 2025, the country will spend a total of 300.7 trillion won on its military over the next five years.

Some of the most ambitious projects Seoul plans to cash out on are building a light aircraft carrier, a nuclear-powered submarine, a homegrown modern generation fighter jet and a multi-tiered missile interception system.

DX Korea 2020 is the country's biggest arms exposition, which will run three days through Friday, with around 200 companies around the world taking part. Some of Korea's most prized arms products, like its K-9 howitzer or K-30 antiaircraft guns, will be test-fired later this week.

Seoul's astronomical investments in its military follow four years of U.S. President Donald Trump repeatedly questioning the necessity of the U.S. military deployment on the Korean Peninsula, and seeking to hike Seoul's defense contributions for the upkeep of U.S. forces by an unprecedented margin.

Though U.S. President-elect Joe Biden has sought to counter Trump's so-called "America First" vision by shoring up ties with allies, Trump's term in office has led to concern in Seoul about the uncertainty of the U.S. military's commitment to its security.

Trump's re-election loss earlier this month also triggered security anxieties when Trump fired Defense Secretary Mark Esper on Nov. 9 for reportedly not showing enough loyalty. Esper's dismissal was followed by the resignations of top policy and intelligence officials in the Pentagon, including Undersecretaries of Defense James Anderson and Joseph Kernan.

On Wednesday, Suh held his first phone conversation with Esper's successor, Acting Secretary of Defense Christopher C. Miller, to reaffirm the continuity of the alliance amid the presidential transition in Washington.

According to Seoul, Miller called the two countries' ties a "model alliance" with one of the longest histories and underscored a commitment to deepen bilateral ties "in a future-oriented and mutually beneficial way."

A Pentagon readout further noted the two defense chiefs discussed the outcome of the 52nd Security Consultative Meeting (SCM) between the two countries in October. The SCM, held between Suh and Esper in Washington, exposed something of a rift between the allies over key security issues including Seoul's push to retrieve wartime operational control of allied forces on the peninsula.

Suh also met with U.S. Army Chief of Staff James McConville in Seoul Tuesday, as part of the general's three-day trip to Asia.