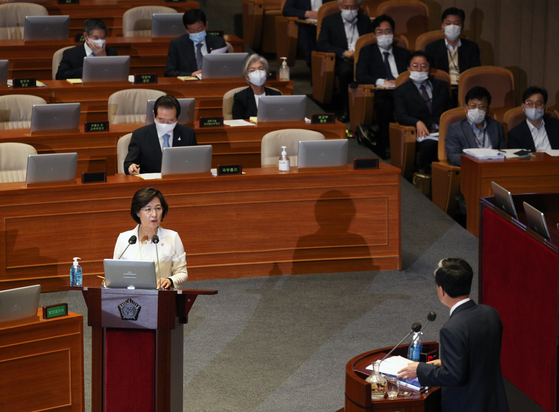 
Members of the ruling Democratic Party (DP) kicked off a series of questioning sessions on Wednesday by calling for cooperation with the North — within the boundaries of UN sanctions.

Questioning sessions are held regularly at the National Assembly, allowing lawmakers to question ministers on key policies and issues. The sessions are divided by topic, and Wednesday's focused on foreign policy and North Korea. Those scheduled for Thursday will focus on the economy, while Friday's will deal with education, social issues and culture.

“Sanctions on the North were not placed there as the end, they were placed there as a means to bring the North to the table,” said DP Rep. Kim Han-jung in questioning Prime Minister Chung Sye-kyun. “But it looks like Korea is stuck in terms of cooperating with the North because it is stuck within the boundaries of the sanctions. And on top of that it needs to ask the United States for permission before it tries to do anything with the North. How is this a road map for the two Koreas to pursue independent cooperation of their own? I call for resumption of tourism packages to the North — there must be ways to make it possible within the regulations set by the sanctions.”

Prime Minister Chung responded positively to the suggestion, but nixed the possibility of contacting his counterpart in the North to discuss medical cooperation related to Covid-19 preventive measures.

“For such a proposal to be made [from my office to the North], there has to be some kind of signs that the North will respond positively,” Chung said. “At this point we don’t see any positive signs in that regard. We will leave many doors and options open in our dialogue and cooperation with the North, but we will take actions while taking into account the actual situations on the ground.”

“President Moon Jae-in mentioned the inter-Korean railway project in his recent address at the inauguration ceremony of the National Assembly,” Rep. Kim said. “Has this project been discussed at the U.S.-Korea working group meetings? If so, what was the United States’ reaction?”

In response, Kang confirmed that the project had been discussed at the working group discussions and that the United States is “supportive of inter-Korean cooperation.”

But she emphasized that the working group discussions are not there to “gain some sort of permission from the United States” regarding the Korean government’s foreign policies.

Members of the main opposition United Future Party (UFP) focused their questions on recent domestic issues, such as the sexual harassment allegations against the late Seoul Mayor Park Won-soon and the motion to impeach Justice Minister Choo Mi-ae.

“There are additional allegations that Park not only sexually harassed [his secretary], but that officials of the city government altogether knew what was happening but stayed silent and did not take any action,” said UFP Rep. Kim Tae-heum. “Shouldn’t there be investigations of these allegations?”

Park was found dead by suicide near his home on July 10. His former secretary had filed a complaint to the police one day before, alleging that Park sexually harassed her during her tenure at his office. The case was dropped due to Park's death, but police are considering opening another case against other suspects involved in the case.

“I agree with your point that the truth needs to be told,” Chung said. “But all procedures from here should be made according to the laws and regulations.”

The UFP submitted a motion to impeach Justice Minister Choo on Monday, claiming that she abused her power by reshuffling the prosecution as soon as she took office in January, largely demoting senior prosecutors investigating the top politicians close to Moon such as former Justice Minister Cho Kuk.

“Why are you impinging upon the authority of the prosecutor general, isn’t it because the prosecution is investigating your own people in the party?” UFP Rep. Kim asked Choo.

Choo disagreed, stating that the prosecutor general was “breaking rules when it came to fair investigations” and that she “had to step in” to ensure investigations were conducted fairly.

The questioning session devolved into a shouting match between Rep. Kim and Choo, with Kim continuing to barrage her with allegations about her abuse of power, along with an ongoing investigation into Choo's son for allegedly receiving favors during his military service.

“I don’t see how I can answer your questions when you are linking completely separate issues and even bringing up an issue related to my son, which is not a relevant topic for the purpose of this session at the Assembly,” Choo said before taking leave of the podium at the end of the session.