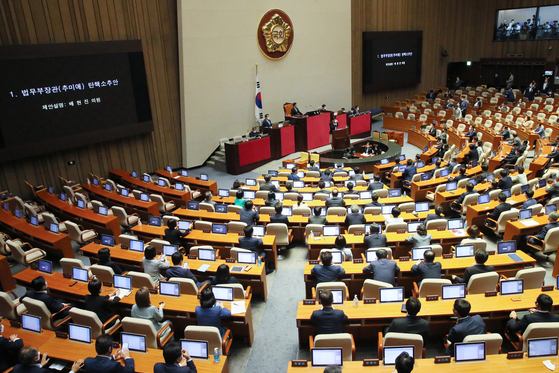 A motion to impeach Justice Minister Choo Mi-ae, sponsored by 110 conservative opposition lawmakers, is brought up for a vote at the National Assembly on Thursday. [YONHAP}


The largest opposition party’s attempt to impeach Justice Minister Choo Mi-ae was voted down by the ruling party during a National Assembly session on Thursday.

The National Assembly held a plenary session in the afternoon and voted on the impeachment motion submitted by the United Future Party (UFP) earlier this week. Of the 300 lawmakers, 292 participated in the voting. While 109 lawmakers voted for it, 179 voted against the impeachment. Four votes were counted as invalid.

The motion would have required at least 151 votes to pass. 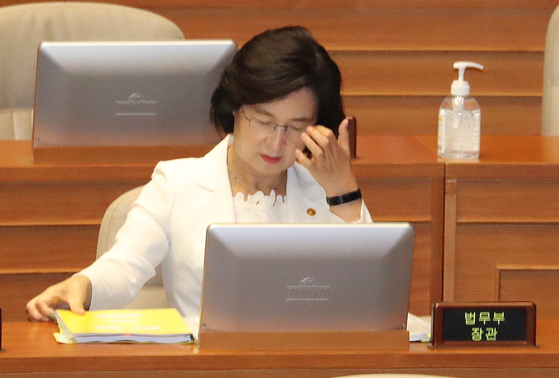 
On Monday, the UFP submitted a motion to impeach Choo to the National Assembly. It was signed by 110 lawmakers. All 103 lawmakers from the UFP, all three lawmakers from the People’s Party and four independent lawmakers who were formally members of the UFP co-sponsored the motion.

Although the motion was struck down, it appeared that at least two members of the ruling Democratic Party (DP) or its allies had voted to support it.

According to Rep. Joo Ho-young, floor leader of the UFP, not all 110 lawmakers who sponsored the motion participated in the voting. Two UFP lawmakers and one independent lawmaker were absent.

The total number of conservative lawmakers who attended the voting was 107, indicating that two votes came from the DP or its allies. The DP has 176 lawmakers and the Open Minjoo Party and the Justice Party have three each.

Choo did not attend the plenary session on Thursday. 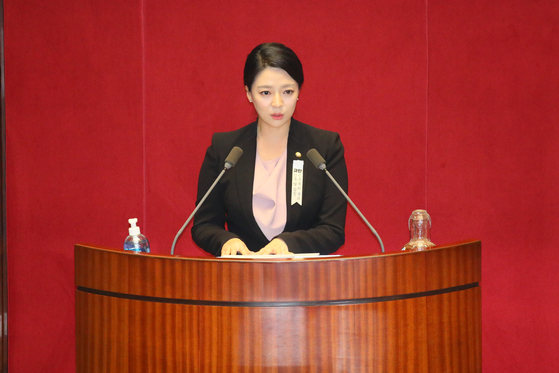 Rep. Bae Hyun-jin of the United Future Party explains the intent of the impeachment motion to the lawmakers before the voting on Thursday. [YONHAP]


“A justice minister is a servant of the people, not a specific political faction. As a servant to the people, the minister must maintain political neutrality, not abuse power of office, never submit to outside pressures and faithfully respect laws,” Rep. Bae Hyun-jin, spokeswoman of the UFP, said before the voting started. “But Choo’s actions clearly violated her duty to serve the people.”

“Shortly after she took office, she reassigned the prosecutors who were investigating corruption and abuse of power allegations against key members of the Moon Jae-in administration, without consulting the prosecutor general,” Bae said, pointing to the move as retaliation.

The UFP's appeal, however, did little to persuade the DP lawmakers.

Earlier in the day, the DP held a general assembly of its lawmakers and encouraged them to use their majority to strike down the motion.

“I urge you to sternly judge the UFP’s political strategy to stop the prosecutorial reform with united votes,” Rep. Kim Tae-nyeon, floor leader of the DP, said during the morning. “I have faith in you.”

Rep. Hong Jung-min, the DP's spokesman, said that after the meeting the DP decided to make a show of force by striking down the motion instead of boycotting the vote to avoid a quorum. A voting session requires a majority of the 300 lawmakers to be present.

“We decided to participate in the voting to follow the protocols in the National Assembly,” Hong said. “We also want to show them that we will use the majority in the standing committees and plenary sessions.”