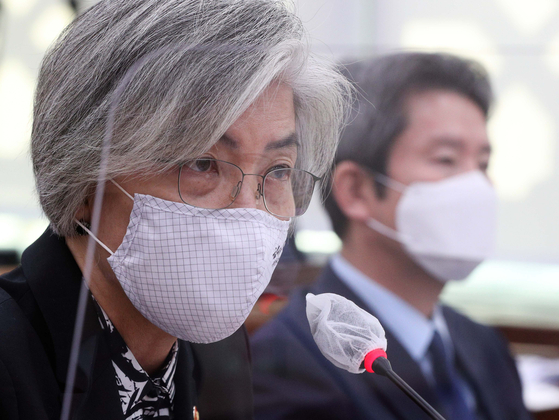 YOO JEE-HYE
The author is the head of foreign policy andsecurity team of the JoongAng Ilbo.


Foreign Minister Kang Kyung-wha was expected to serve through the five years of the Moon Jae-in administration, but she didn’t last.

Kang’s appearance was spectacular, as she was the first female foreign minister and the first one who did not join the ministry through state examination. There were high hopes as she was fluent in English and had sophisticated international manners. However, through her tenure, she was criticized for incompetency. She was not always visible in the places that the foreign minister should have been, creating controversy that she was bypassed by the Blue House.

Ten days before the historic Panmunjom inter-Korean summit in 2018, Kang was in Kazakhstan, which means that when a tripartite negotiation among Seoul, Pyongyang and Washington was in progress, she was traveling abroad.

In 2019, she was also on an overseas trip when the Blue House held a National Security Council meeting and made the major decision to end the General Security of Military Information Agreement (Gsomia) between Korea and Japan. Last year, the Blue House called a ministerial meeting right after a maritime ministry civil servant was killed in the West Sea, and Kang was not invited.

From the beginning, the Blue House had expected a very limited role for the Foreign Ministry. The Blue House initiated major issues such as the North Korea nuclear policy and diplomacy with four powers. Kang is not someone to demand “a share,” but she has never been given a chance to prove her competency. Probably because of the criticism, Kang said last year, “I am doing my best to serve the important post as the first female foreign minister, but sometimes, I feel some things happen because I am a woman.”

The human rights issue in North Korea may remain a burden for Kang. She took pride in being an international human rights expert, but she remained silent or reiterated the government’s stance on sending back North Korean fishermen or banning propaganda leaflets. Even the United Nations, where she had worked for nearly a decade, criticized her.

As a new administration is beginning in the United States, Kang is making an exit. Some look down on her experience as an interpreter, but her presence stands out, as many people feel that her fluent English skills, open personality and rich international experience could have helped.

Her name is mentioned in every election, but I hope I won’t see Kang enter politics, as she does not have the guts to deal with the mud fights.